Months of late night turbo sessions, thousands of winter KM’s and hundreds of cups of coffee finally got me through to the first race of the season-Stourport 4th Cat criterium race. This is going to be my first proper season of racing and I had made sure I had completed the best possible prep I could heading into it…

I’d decided after a short amount of racing experience from the previous season that this year was going to be different. I was going to set out a proper training plan, prepare fully for the entire season and achieve some personal goals. Win at least one race, achieve a sub 30 minute in the BSCC 13mile TT and mainly get myself promoted from 4th Cat to 2nd by the end of the season. A big year of racing, learning and pain is ahead of me!

One thing I had learnt from the limited amount of races I entered last year is that you cannot teach race craft- and race craft is everything. I had been fortunate and received a lot of support from club members and racers from other local race teams about how best to tackle a race, when to save energy, when to attack, bunch positioning, sprint finishes, course profiles etc… but I have learnt it’s one thing to take that all in and another to make it happen!

One massive personal advantage heading into the start of this season is me working alongside a great local cycling coach – Cameron Foster of Badger Rampage Coaching! Not only is he himself a great racer riding at 1st Cat level but he is a master of power and heart rate numbers, understanding the strains racing will put on your body and providing me a structured training plan to help me this season. Having this structure, performance evaluations and the pressure to train and not slack off any training has motivated me to train hard and stay focused on smashing my season’s goals.

So months of planning and this season was kicking off on the 28th January at the Stourport circuit hosted by Mamil Cycling. I had signed up for the 4th Cat crit alongside some of my riding mates and was ready to give this my best shot to see where the legs were this early into what will be a long season!

Race day came along very fast and I was feeling anxious, but excited to get underway! I packed my car the night before- the luxury of riding my new carbon race bike was enough to get me excited let alone racing later the next day and I laid out all my race kit on the kitchen table along with my pre/post race drinks, energy drink, food, gels and helmet- definitely do not want to forget this!

The race was in the afternoon at 4pm so I decided to drive to Stourport to support my friends who were racing in the morning and get a feel for the circuit as this was my first time! It features two tight hairpin bends with a few high speed flowing left hand corners in between – technical but nothing too difficult! After 45mins of cheering on Lydia’s first race with the women I met up with my mate Jos who was going to be riding in the same race as me in the afternoon for a coffee and beans on toast – best prerace food- in a local café to talk race strategy… time for the serious business to start.

The pre-race coffee meet turned into a race ender for my mate who crashed his bike into a height limit barrier in the car park cracking his frame in two- an attempt for a new bike maybe? – so the race was left down to me and rider Leon O’Rourke to make of it what we could.

Signed on, timing chips attached to bike and 30mins for a structured turbo warm up I was ready to race. I tried to focus on the race during my warmup, focus on what I was going to do and zone in – I had done a lot of hard work so now it was time to go out and enjoy the sensations of riding so fast so close for the first time of the year. I was number 28 of 51 riders, this was going to be a crowded race! I rolled up to the start line as the sun started set eyeing up who was around, I needed to get to the first hairpin near the front and then ride hard…

The race commissaire blew the whistle and the race started fast with everyone sprinting off the line. I pushed and got into 10th wheel by the first hairpin as I had planned and manoeuvred it safely. The bunch pushed on and I was focussed on staying near the front, not wasting energy and keeping it flowing staying off the brakes as much as possible – smooth is everything when racing. After 2 laps I stole a look over my shoulder to reveal a group of 20 riders (me and Leon included) had a gap of 50 metres. This is all that’s needed to end their race and make ours much better so we carried on pushing.

I decided to take my turn on the front early on in the race so I could recover to try and make a move off the front or sprint later in the race. I did a lap leading our group round and then pulled off to sit around 15th wheel and look at what I could do in the race. In the end it turned out I was focussed so much on riding the bike safely and as fast as possible I didn’t have time to think about making a move – a sign of in-experience and where I can improve on for the future!

Nothing beats the sensation of being in a tight group flowing through tight 90 degree corners at near to 40kph, heart rate racing with an awesome sunset for added race atmospherics. Before I knew it the commissaires shouted the count down for 3 laps to go. 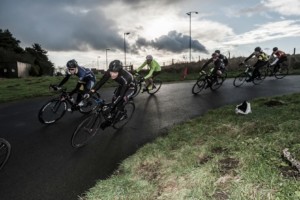 I needed to be near the front now, need to move into 5th wheel and fight to keep it if I wanted a chance at a win let alone points – but this circuit is fast and tight it was now or never to position myself. The bell lap came sooner than all the other laps had as the average speed crept up to 39kph and I found myself in 12th wheel, TOO FAR BACK!!!

Final corner before the spring finish was the fast 90 degree bend, the fastest line for me was around the outside with maximum speed and commitment. If I got the bend right I could get a good slingshot around the other riders for the sprint. I flew through the corner at 41kph (according to Strava) and opened up my sprint, full gas! No bother worrying about positioning now it was all or nothing so I dug deep, eyed up my sprint line and maxed out.

A new power PB and a max heart rate of 206bpm and I chucked the bike across the line! Yesss.

First thing to do, count how many riders ahead of me and get my breath back! An initial count gave me 13th! Damn just out the points but then the official race results gave me 10th and Leon an incredible 3rd place!

What a brilliant race, I hadn’t had as much fun as that ever in a race before and to come away with a result is a good achievement for me! I’d thoroughly recommend entering a race, nothing to lose and plenty to learn and gain from! I came away from that race with lots of positives to improve from, but I feel like the fitness is coming and with that hopefully some results so let’s see what the season brings! I am eager to see what the future has in store now!