Member Moria Goodway, the club’s long time and recently retired Press Officer, relates the story of her late start to cycling and its successful outcome.

For various reasons I came late to cycle racing.

I started probably around 1988, going on Laurie Allitt’s 9.30am Sunday club runs. When time allowed, I did this for a few years but, as my fitness improved, I started to find the pace frustratingly slow. Robert Frowen, our ex-president, then encouraged me to try the Wednesday evening time trials.

My bike was ladies tourer with no cross bar so it used to develop a scary speed wobble when going downhill. At that time there were no traffic lights at the Barley Mow so we could ride a complete circuit which was about 13.3 miles. I got used to being passed by all the men until one evening we did a double circuit because the 25 course was unusable. One of the men passed me along Edge Hill on the second loop. I noticed that he wasn’t pulling away from me; in fact, I was catching him up again. I caught and passed him but he overtook me again. “I’m not having that” I thought, passed him again and left him behind. That is when I realised that I might be able to do something in time trialling. 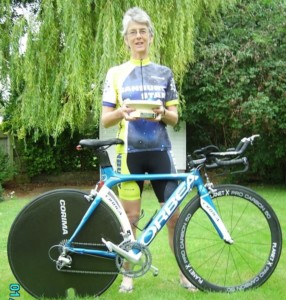 Winning the Midlands Women’s TT trophy for the fastest      vet on a standard bike at 60.

In 1998 I treated myself to my lovely Bianchi and started to have some success in open events. At that time all the women’s club records were held by Rhiannon Evans. I was due to ride a 50 in early September. I had noticed that the longer the race the closer I came to Rhiannon’s time. One of the men in the club told me to go out and ride a 25 twice over. I realised that, if I could do that, I would take the record. I kept this ambition to myself in case I failed. The weather was awful and I feared that the record would be out of reach until suddenly, the 1/2 mile to go sign loomed up out of the gloom. I’d done it! Despite being soaked through and shivering with cold I felt great. One of the happiest days of my life. Over the next two years I nibbled away at that time until I’d lowered it by about 8minutes. On my 52nd birthday I rode the same course as in 1998, but this time conditions were perfect and I knocked nearly 5minutes off the total. That record stood for 8 years until I took nearly another 3 minutes off.

Over the years I took all of Rhiannon’s records except the 15, simply because I had never ridden that distance, and the hill climb (which I was useless at). Since then younger women have come along and bettered all my times, which was inevitable, and I expect that the club records will continue to fall.

I have written this to show two things: that you don’t have to be a spring chicken to get some success and you don’t necessarily need high tech equipment to do well. I was a couple of months short of my 60th birthday in 2008 when I lowered the 50 record and set a time for the 100. In the early years I was racing on a road bike with clip on tri-bars but none of the other specialist equipment we have come to rely on i.e. no aero helmet, no skin suit, no deep section wheels, no disc wheel, no carbon fibre (the Bianchi is aluminium).

So my message to new women thinking of trying some racing is this – don’t let age or lack of equipment stand in your way. Get out there and give it a go. You might enjoy it.