My first year properly into cycling.

I saw a post on the Village cyclist page inviting non-members to attend a 10 mile time trial starting at Greatworth. First of all I thought, what’s a time trial?  Secondly I thought, better dust off my bike and oil the chain.

I drove the 4 miles to the start point, unloaded my bike and said hello to anyone friendly enough to say Hi, which was a lot of people. I was somewhat amazed by the bikes other people were turning up on or unloading from their vehicles and what they were wearing! There I was, bib shorts (with underwear on as well as I knew no different at the time) and a standard t-shirt. When the numbers were handed out, of course I was number 1. But with the kind, comedian time keeper Keri keeping my nerves at ease as a lorry’s trailer strap taps me on the shoulder, he counted me down to start my ride. It was at this point I was thinking, go go go fast as I can. For 2 miles possibly 3, I was bombing along thinking yeah this is great fun. Then the notorious feeling of a flat tyre hits me and I stop in a farm entrance to change my tube. Yes, that’s right change my tube on a time trial. I was as much of an amateur as you could get. After the fastest tube change ever I was underway again with the old tube over my shoulder. I got to the A43 turn around point only to realise it had been a slight downhill to this point, and by this time I was ‘blowing’. Eventually I made it back. I collapsed on the grass verge, caught my breath and said thank you, you will see me again for sure. 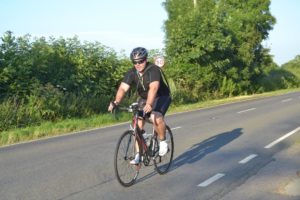 Three weeks later it was the K4/20 TT, still as a guest and never cycled that side of Banbury before I was given the advice that the course is uphill to the first left, flat to the Stratford road, and downhill to the finish line. Advice which was well received until I realised there is a big dip between Wroxton and Drayton. By this point I was done in, so down into the dip I went and just about managed to get through Drayton to be met by the people who passed me and time keeper Keri.

Having been weight lifting/bodybuilding for the previous 10 years this was a whole new experience for me as cardio, hindered ‘gainz’ and was only acceptable for a ten minute heart rate raising exercise before a session.

It was the Saturday after this time trial that I would join the gentle club ride. I parked in the water works car park and trundled over to Broadribb’s nice and early only to realise I had left my helmet at home. Luckily my amazing wife delivered it before we started. I remember it was a beautiful Saturday morning. We came to a stop at one of the most interesting coffee shops I had been to. Sipping on my beverage, every now and then I would catch a whisper of ‘Whichford climb’.  Having no knowledge of this side of Banbury I didn’t really notice the massive hill we were about to embark upon.

With everyone refreshed we made off, round the first corner to be faced with this ‘Whichford climb’ I had heard about! I was definitely thankful of my 34t chainring and 32t cassette!

I then became a Star!

I was now hooked on cycling.  In ten days I had cycled to work (30 miles), to my Grandmas house (40 miles) and at this point I was feeling invincible.  We were off to Cirencester to visit family for a late lunch. Having completed 30 and 40 mile distances pretty easily what was another 10?

That extra 10 miles seemed like an extra 30! I hadn’t taken into account how hilly it was!  The route was through Chippy to Stow on-the-Wold, Bourton-on-the Water and following the A429 all the way to Cirencester. A trip I still haven’t plucked up the courage to do again.

My next big ride would be the autumn reliability ride. Looking back on it now, I probably shouldn’t have done it as my wife was overdue to give birth to our son. But anyway, I did it, with great agony. This was the furthest I had ever cycled in one go.  The days followed with a great amount of chafe. It was only at this point that I found out underwear isn’t needed to be worn under bib shorts.

With how much I was enjoying cycling I thought I deserved a new bike. Having been really impressed with other members bikes I finally chose my new bike. It wasn’t long until I was making the phone call to delay the delivery as we were in hospital having our second child; October really was a great month.

With the challenges of a new born baby, a young springer spaniel, a 5 year old daughter and going back to work, I somehow managed to complete more winter miles than I did summer miles.

It wasn’t long until it was the New Year and I was thinking of challenges for 2017. Well, I had invested in the bike, now it was time to use it.

Following a bike fit it was the Spring Reliability Ride.  This time the 60 odd miles were more manageable and I got back in time for a certificate.

Next was the Hardriders Time Trial.  Having been in a car struggling to go up Sun Rising hill I thought I should recce the climb. Awful weather and inexperience in layering didn’t do me any favours but in an hour 20 I had done it, not a blistering time but I had achieved an average of 17mph which is what I expected so I came away cold and happy.

It was a cold March this year, and with no specific winter cycling gear and not knowing how to layer smartly I ended up with a cold and chest infection, not what I needed as I was building up to an 88 mile Sportive back in my roots of South Oxfordshire. This was my next challenge, the Ridgeway Rouleur. 88 miles from the Oxford football ground, up and past the White Horse Hill at Uffington, crossing the ridgeway via Wantage to get to the second feed stop at Farnborough (I think it was) before making the return to the Kassam via Compton, Goring, Wallingford and finally Watlington. The longest 6, nearly 7 hours of my life.  I was now full to the brim with a sense of accomplishment that I had finished the ride. Starving wasn’t the word I used at the time but my wife had bought me a tuna sandwich and a Lucozade to eat in the car on the way home. Probably not the best recovery food, but hey, I’m still learning. It was an hour journey before we pulled up at home. Feeling good I jumped out the passenger seat and landed with a steamroller of cramp in both legs and collapsed on the driveway in agony.

It would be 8 days until I got on my bike after the Ridgeway ride.  At the Sunday intermediate ride, everything was going well until about 10 miles in when I felt like my legs had fallen off and I was dragging a pile of bricks behind me. At this point I realised the importance of recovery rides.

My most recent noted ride was the Broughton Castle 50, a route I really enjoyed but has made me change my half year personal goals to hit before the end of the year. Having now built a good aerobic threshold zone, I know realise it’s time to lose some weight and work on my techniques. All in time for a bid to enter a criterium race before the winter weather sets in.

This has been my cycling journey so far and with the continued support of the club members I hope to continue to accomplish my goals every half year.