Member Joby Mullens recalls his recent LEJOG ride – something that was on his “to do” list, but which also gave him the opportunity to raise support for The Gatehouse Project. Joby’s Just Giving page  – https://www.justgiving.com/fundraising/joby-lejog2017 – is still live for anyone interested in supporting the charity. This is Joby’s story:

“Excuse me, you couldn’t just help me get my money pouch out,” I appealed desperately to the lady in the supermarket queue – pointing sheepishly at the rear pocket of my soaking cycle jersey, my numb hands proving about as much use as the proverbial chocolate fireguard in retracting it.

It’s not the kind of request I make to random strangers every day, but it’s not every day I ride Land’s End to John O’Groats, (LE-JOG, as I may affectionately refer to it as hereafter..) the 874-mile journey being on many a cyclist’s ‘to do’ list.

Certainly it was something that had been on my radar ever since a friend had asked me to do it some 10 years ago, an unfortunate incident on a catamaran in New Zealand and a resulting torn ligament ruling me out on that occasion.

It was that same friend who had sparked my love of cycling some years before, inviting me to join him for the London to Brighton charity bike ride on my mountain bike….the 54 mile route seeming trivial in comparison to what I was now attempting.

Having turned 40 earlier this year, I decided it was the opportune moment to take off on this journey, while at the same time trying to raise funds for the Gatehouse project, a charity for the homeless in Oxford which I also volunteer for.

A quick internet search reveals that the record for Land’s End to John O’Groats is held by Andy Wilkinson, who rode the distance in just over 41 hours on a recumbent tricycle. I was, however aiming to complete it at a relatively more sedate pace of 13 days (I chose 13 and not 14 due to the holiday time I had left and the fact it wasn’t possible to get back in one day returning on a Sunday, not because I was tempting fate). Indeed, the number 13 being unlucky for some – I hoped it would not the case me.

My departure day from Banbury had come after months of planning prior, using a route I had found in the Lonely Planet Guide to Cycling in Britain as the basis for my own course, uploading each day’s leg into my Garmin and printing paper maps as a backup.

I booked cheap accommodation for each night in whatever I could find – hotels, B&Bs, hostels – in the areas I was passing through around the distance I wanted to travel each day. I’d bought a 10 litre backpack to sit beneath my saddle days prior as I decided it would not be wise to attempt the undulating countryside of the UK with a backpack on my back as I had done cycling through Europe the year prior. I had everything planned meticulously, down to my budget for food for each day but there was one thing that I had little control over – and that was the weather.

However, as I set off from Banbury Penzance-bound (literally the end of the line) at the start of July it seemed that the sun was shining on me on what was a glorious (and some might say) rare English summer’s day. The following day I was to head westward-bound to Land’s End to start my adventure.

Returning to the ‘supermarket incident’ as I shall now call it (and to put things into context…), it was the penultimate day of my adventure and I had just spent the last four hours or so riding in persistent torrential rain.

Sodden to the core as I arrived at the small town of Tain in the Highlands of Scotland, I had noticed scouring the paper map of my day’s route earlier that day that there was a supermarket here if little else.

I hoped this would provide me with some small crumb of comfort in the form of sustenance (a three for £1 chocolate twist deal which had become one of the staples of my unusual diet for the trip, if you’re asking). Fortunately, thanks to the kindness of strangers, this seemingly was not thwarted by my feeble hands.

Earlier that day I had also rather embarrassingly faced one of my biggest fears – heights – as I traversed the menacingly slippery-looking metal footbridge about 100ft above the Kyle of Sutherland (one of Sustrans more ‘interesting’ cycle routes shall we say. It seemed LE-JOG was throwing all it could at me that day.

But without meaning to put a dampener (pardon the unintentional pun) on what was generally otherwise a once-in-a-lifetime experience, while there were a few other lows, there were also indeed many other highs (both literally and metaphorically speaking) of my trip.

The literal highs being scaling Shap Fell in the Lake District in drizzly conditions on day seven and – on day 10 – climbing the dramatic peaks of the Cairngorms including the Glen Shee Mountain Pass on the A93, feeling defeated as it managed to unseat me near the top. Hanging my head in shame as I scuttled up the remaining metres on foot, I regained some sense of dignity after being told it was the highest mountain pass in the country.

The metaphorical high came upon the descent, hanging on for dear life as a fierce side wind did its best to knock me sideways as I hit pant-wettingly high speeds of 50mph, the fastest I have ever been on two wheels.

Another challenging ascent was on day three (Tiverton to Bristol) going up Cheddar Gorge in Somerset. The last time I had gone through Cheddar Gorge it was downhill, in pitch black and in the pouring rain (I should explain I’m not a complete nutter and that this was riding the Exmouth Exodus – an organised night time ride from Bath to Exmouth – with a friend the previous year). Therefore it was somewhat of a more pleasant experience on this occasion, if a little tougher.

The other metaphorical highs were many and too countless to mention all – from the blissfully quite    Shropshire pan-flat country lanes snaking through picture-postcard countryside, the dramatic scenery in the Lake District and the Highlands of Scotland to the beautiful settlements I passed through such as Tiverton, Ironbridge, Lancaster, Worcester, Braemar and Perth.

There was also the impromptu stop for a pint at a random Cornish cider farm which seemed to fortuitously appear out of the middle of nowhere near the end of what was a tough first day – 95 miles and around 2,200 metres of climbing in baking heat.

And there were the unexpected surprises throughout including the (not so) secret nuclear bunker I passed in Cheshire, stopping at the Kagyu Samye Ling Monastery near Langholm in Scotland for a chai latte (and to get in touch with my inner zen) and a welcome home-made ice cream from a farm near Lancaster, to name but a few.

Indeed, it was a joy also to be able to indulge in calorific portions of comfort food each night guilt free as (I hoped at least) a day in the saddle would be sufficient to burn it off.

But it was also as much about the people that I met along the way as the scenery. From the friends who met me in Bristol and my former home city of Worcester for meals and drinks (one friend even buying me sushi for my journey as he was concerned I was not eating enough!) to the elderly gent who I met on a coffee stop in Grantown-on-Spey who had travelled all the way down from Aberdeen to see his mum in a care home. Then there were the lovely couple who ran the delightful 250-year-old coaching inn I stayed at in the Ettrick Valley who had appeared on the Channel Four programme ‘Four in a Bed’.

And the lady who had left her life as an accountant behind in Wallingford  to travel Scotland with her husband in a camper van, ending up buying and running the B&B I stayed at in remote Altnaharra in the far north of Scotland after falling in love with the place. It was a joy and a pleasure to meet all of these people and hear their stories.

Fortunately the lows amounted to minor, admittedly all the same still frustrating, incidents such as losing my raincoat on a particularly steep section in Devon and then turning back to try and find it to no avail (conscious the weather was going to be horrible the next day), probably doubling my climbing for that day.

…and the crash on day 11 going down a steep hill near Inverness where I decided to embrace a gorse bush and which left me picking gorse needles out of my cycling jersey, nervously taking Ibuprofen for the remainder of the trip to prevent any swelling which could curtail it!

My last day in Altnaharra also proved that when people warned me about the midges, I should have taken heed, as a swarm of the blighters descended on me as I loaded my bike up – swiftly hastening my departure and leaving me scratching for days on end! 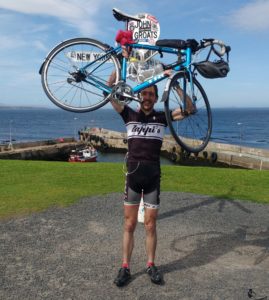 On the whole though good fortune was on my side (I only had one puncture!) and I was blessed with good weather, bar the occasional headwind keeping me on my toes and reminding me that what on paper might seem like an easy day’s riding can be anything but when the elements are working against you.

And as the days passed by and the miles totted up, it became more of a surreal experience as I crossed county and then country borders as I made it to Scotland, the nagging doubts of ‘can I do this’ quickly swiftly changing to, ‘I am doing this!’.

By day 12, with the end almost in sight, not even the day’s torrential rain could dampen my spirits as I realised I had gone too far to give up now.

The final test came as I passed through Thurso on my last day, the last town before John O’Groats (and where I was to stay for the night – a tactical bag drop on the way through lightened my load!) and hit what seemed like the mother of all headwinds. The last 20 miles therefore were somewhat of a slog, with the pin straight flat roads trailing off into the horizon meaning there were no twists or turns to distract me.

Frantically thinking of anything I could to take my mind off the wind, I kept my head down and pedalled on, knowing the end was not far away. Gradually, the signs for John O’Groats appeared in the distance and I coasted down the short hill to the signpost stating how far places such as New York are which marked the end of the road. Both elated and relieved, the realisation kicked in that, after 13 days and 1,097 miles (which includes a few ‘detours’ I made…) I had made it!

Going back on myself to ride back to Thurso was somewhat of an anti-climax but I was buoyed somewhat by what was now a tailwind and the euphoria of completing.

I also felt somewhat of a tinge of sadness though as I knew that the following morning while I would be setting off on another journey…this time it would be home via public transport and not on two wheels. Suffice to say I am already planning for my next cycling adventure!
Joby Mullens