I’m often asked what keeps me riding my bike at “My Age”. Truth is I never think about “My Age” it’s only others that find it unusual, for me the years roll around and I roll with them. There are as many reasons as days in the year why I love cycling and maybe this blog will shed a little light on it and also remind me of some of the things that cycling has enhanced in my life.

Like all the best stories this one also starts with “A long time ago”. A long time ago in a little mining village in County Durham in fact. Times were tough and the hills were even tougher except most of us didn’t know or care, all we wanted to do was ride our bikes, to the beach four miles away or just around the block it was all the same when I was 12 years old. A new Raleigh bike for my 14th birthday changed my horizons and view of the world as I began to travel further and further on my bike – till eventually multi day rides to the Lake District and the Borders became the norm in school holidays. Bikes loaded with tent, sleeping bag, spirit stove and the bare essentials would get us through 100 mile days often 12 plus hours in the saddle; we never thought of it as “epic” as some think of today when considering a 100 mile sportive as we went at a pace that would get us there. So in the beginning was the Bike and the Bike was good and all was well with my world. It’s hard to comprehend the differences from those days to now, no mobile phones and my family didn’t have a phone at home so there was absolute trust that I would behave sensibly and arrive home some time near to when I said, there were usually three of us on our camping rides and my parents and my mates parents never showed undue concern, how different from today – but is it any more dangerous? Not as much as most believe it’s just that the accidents that do happen are better publicised. 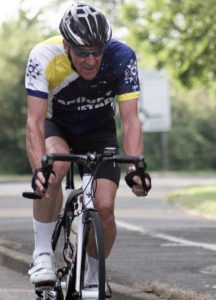 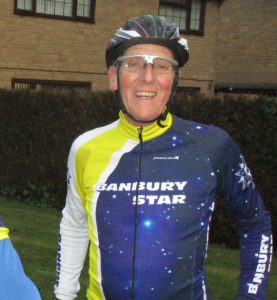 Two incidents from that day always stick in my mind; one was on the long slog across the moors from Bowes to Brough on a ride that would take us to the Lake District. This was always tough, uphill and usually into a west wind mile after mile. A car pulled up in front of us and flagged us down, the driver came over to us and gave us a bunch of grapes saying “ Have these you look buggered” Ah, the kindness of strangers. These kinds of things still happen as Joby Mullens told me of kindness offered to him on his recent Land’s End to John O’Groats ride. On another ride to the Lake district we arrived in Kendal quite late and needed somewhere to pitch the tents for the night so saw a small island in the river Kent connected by a foot bridge and went ahead and pitched up for the night and slept the sleep of the innocent, on waking in the morning I poked my head out of the tent to see water lapping half a metre from my tent. It had rained in the night and of course the river level rose!! Across the river a postman was delivering mail and shouted “alright young un?” I asked how long before the water went down and he said not more than two hours, so on went the spirit stove and breakfast !! Wonderful memories with good friends and a bike of course.

From those beginnings I was rarely without a bike, a bike just seemed as necessary as air to breath and just an integral part of what I was. Most of my adult life was spent doing shift work and the last 30 years of my working life on continuous shift work where I had few weekends free and those I had usually were eagerly awaited by my family for “together time” so a cycling club didn’t figure in my life as most of my days off were mid-week. This did however give me lots of hours on the bike, kept me fit and reinforced my love of cycling. I was very lucky to be able to retire early at 60 and go traveling on the continent in my motor-home always with a bike on the rack so life was good and most days began with a ride to the nearest boulangerie and usually a longer ride to explore the locality. It’s only as the years passed that I noticed that friends and acquaintances started to view me as different because I still rode a bike and was active, for myself nothing much changes as I love cycling and the feeling of wellbeing that I have after a good ride. If there’s a message in all this it’s don’t stop doing what you love because of other people’s view of what you should do, really it’s what they’re not doing that’s odd!! A little older each year and a little slower though I just dig deeper on the climbs to keep up. 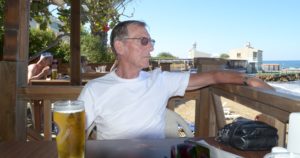 Joining Banbury Star was a turning point in my cycling life, suddenly I wasn’t riding alone, I met some great people and I realised that a new chapter had opened. It has given so much pleasure being a member of The Stars. Life goes on and the wheels keep on turning, I’m having so much fun these days whether it’s on a club ride or riding a time trial or organising the Sunday Intermediate Ride with John Tustian. If there is a secret to riding in your senior years I’d say it’s just keep on doing it, don’t accept that you’re going to be slower and less competitive, you will be but just don’t accept it!!! I still get a thrill out of beating someone up a climb or clinging on a wheel on a fast club ride, cycling; it’s my drug of choice and I’m unashamedly addicted. The friendships I’ve formed in the club are some of the best in a long life.

So here’s to the future, may it be long and filled with good days on the bike with good friends alongside, so much to do and so little time but as my father told me all those years ago, “If you want to get a job done, find yourself a busy man” so being that busy man I guess I’ll find time.