So, on that basis, with four in the garage, I feel I can at least write a bit about my bikes and hopefully encourage a few of you to let us know what’s in your garage. I’ve always cycled from an early age, but only got into proper drop handle bar road bikes about 15 years ago. All my bikes I’ve bought from new and this is my current fleet in order of age.

Bike number 1, is my Dawes Galaxy, a traditional Reynolds 531 tubed touring bike, which I bought in 1997 and is still probably my favourite. I’ve done thousands of miles on it from Lands End to John O’Groats and Coast to Coast rides, plus many touring holidays, mainly through France. It only ever let me down once, when the chain broke touring the Isle of Wight, but given it was fully loaded with four panniers, that’s not bad. I only recently bought a set of new wheels as I discovered the original rims were getting very worn and thin. When not touring it still gets ridden regularly most weeks into Stratford for small shopping trips.

Bike number 2, is my Van Nicholas Euros, currently my most regularly used bike and my first serious road bike, which I bought in 2008. I’d had a previous budget road bike, but never felt happy on it, so this time I went to a specialist dealer for a fitting and some advice. Being a bit of a traditionalist and loving the look and strength of titanium I went for the Van Nicholas frame. At the time I didn’t know how seriously I was going to take to road biking, so while the frame was fairly expensive, I went for a Shimano 105 groupset set and some fairly ordinary wheels. Even so, the difference was amazing; I really had at last caught the road bike bug. It even encouraged me to ride another LEJOG trip with some friends. I’ve now upgraded the bike with the latest full Shimano Ultegra 11-speed groupset and a set of decent Shimano RS81 carbon/alloy wheels. 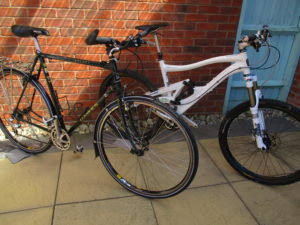 Bike number 3, my most expensive purchase, is my Marin Mount Vision 5.8 mountain bike (MTB) which I bought in 2009. I’d owned several MTBs previously and love the thrill of off-road riding, particularly fast single track downhill stuff. My only competitive cycling has been on MTBs, having entered many races, including two 24 hour events. What Mountain Bike magazine voted the Marin MV “Bike of the Year” in 2008 and it was certainly a big step forward from my previous bikes. It was well spec’d with a 6066 aluminium frame; Fox front and rear suspension, disc brakes, Shimano XT groupset and Mavic wheels. I’ve since upgraded a few items – carbon handle bars and to cope with two long enduro rides in the French Alps, Hope disc brakes with larger rotors and an adjustable dropper seat post.

Bike number 4 is my Kinesis Racelight T2 aluminium winter road bike, which I built up in 2013. I really didn’t want to get my lovely Van Nicholas and new Ultegra gear covered in winter muck and salt and I certainly didn’t want to try and fit mudguards to it. So, as I was still in possession of the old wheels and 105 groupset from my Van Nicholas, plus handle bars and a saddle I had in store, I only needed a frame, forks and mudguards to put together a good winter bike. 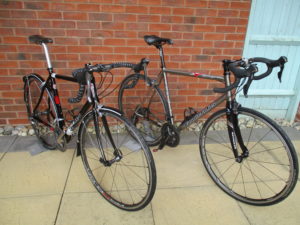 So, thinking about the n+1 formula, what would my next bike be? Well, it would have to be something completely different, that’s for sure. Although my fellow septuagenarian Mr Ord might disagree, I think I’m too old now to contemplate a TT bike, although I’ve always wanted to have a go on one. So, after a lot of head scratching it would probably be a Schindelhauer Ludwig X1V. Yes, what a name for a bike. I first saw one of these bikes at a London cycle show a few years ago and loved its build and simplicity. It’s a modern aluminium frame hybrid with a 14 speed Rohloff Speed Hub, Gates carbon drive belt and hydraulic disc brakes. I think I’d even specify the latest Tannus solid tyres, which are starting to get good reviews. As I said – something completely different. 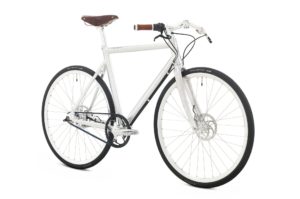 What have you got in your garage and if you had to add another to your collection, then what would it be? My collection is fairly varied as you’ve just read, but I’m sure it’s not as exciting as what other members have. Do let us know at blogger@banburystar.co.uk