As explained in the November newsletter, the club has recently acquired a large collection of old club records, photographs and press cuttings. These are all now with a local historian and it is hoped that the material is sufficiently interesting to feature in a column he writes for the Banbury Guardian. Following our last blog by Lydia Watts on gender inequality in cycling, it reminded me of something I’d read among the old press cuttings on this very subject.

These particular articles were written in early 1935 and although Banbury Star was in its 41st year, it was still very much a male-only club. It was a very different time, with women over 21 only having seven years previously succeeded in getting the right to vote, so perhaps that’s not unusual. 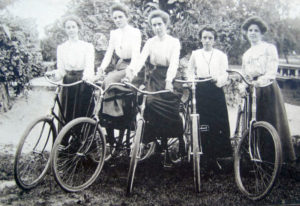 So, we must thank member Mr A.W.Cotterell for his 1935 AGM motion to admit women members. The extracts from the two press cuttings below are very similar, but the headlines, given the fact that the motion is the lead item in both, illustrate its importance.  From what I’ve been able to find out these cuttings were from the Banbury Guardian and also probably the Banbury Advertiser, which stopped publication in 1976.

At the annual meeting of the Banbury Star Cyclists’ Club held at the “Dog and Gun”, Banbury last night, Mr A.W. Cotterell gave notice of a motion to admit women members to this old established club, whose 41st annual meeting it was. Lieut.-Col. M.W. Edmunds, the club president, who was in the chair, said this would mean an alteration in the rules and an extraordinary general meeting was fixed for 9th April to discuss the situation.

It is possible that the Banbury Star cyclists’ Club will expand by becoming a mixed club in a few weeks. At the 41st annual meeting at the “Dog and Gun” on Tuesday, Mr A.W.Cotterell gave notice of a motion to incorporate women. The president, Lieut.-Colonel Maurice W. Edmunds, who was in the chair, pointed out that it would mean altering the rules of the club, so an extraordinary meeting was fixed for 9th April.

Unfortunately I could find no report, or mention, of a subsequent extraordinary meeting, but I did pick up the following in a general club report later in 1935, which confirms the motion was passed.

This year the club has decided to admit ladies, and it is hoped that all lady cyclists will take advantage of this opportunity and join the club. The annual subscription is ladies 2s. and gentlemen 2.6d.

That final line of course brings us back to gender inequality with different subscriptions.