Bill Ord gives a detailed and fascinating account of his experience regarding the pros and cons of tubeless road tyres.

For the past 4 years the advance of tubeless tyres for road bikes has been edging closer and closer to the mainstream. One tyre seemed to be getting lots of attention and good reports, tests even showed this tyre to be superior to Continental Grand Prix 4000s my favourite tyre and much beloved by cyclists everywhere for its low rolling resistance, good grip long life and relatively good puncture protection an all round must have tyre that came at a reasonable price.

The ability of tubeless to be unaffected by pinch flats which are the bain of our lives given the abysmal state of Oxfordshire’s roads was high on my list of desirable features as was the ability to seal punctures with the addition of a liquid sealant to the tyre. At first it seemed like it was a requirement to have tubeless ready rims which my Canyon Endurace came fitted with in the form of DT Swiss RR21 wheels, my Ribble is fitted with Fulcrum race 3 wheels which ae not tubeless ready but have the big plus of not needing rim tape to seal the spoke holes as the wheel has a double wall construction which has a rim well which is free of holes except for the valve aperture. There is a two-way ready version of this wheel which sells for £150 more than the standard version so I opted for the standard version on grounds of cost when I bought the wheels, however I read in a Schwalbe article that tubeless rims were not necessary!! Big surprise.

So, the Conti 4k’s on the Ribble were on there last miles and I decided to go for it and ordered a pair of Schwalbe Pro One tubeless 25c hoping that they would have clearance for mudgaurds as the Contis had to be 23mm at the rear to give clearance for the guards, Contis generally are much bigger than the nominal stated size. I purchased a pair of tubeless valves from Wiggle from their basic Lifeline series and fitted these to the rims. Next job, soapy water round both beads of the tyre to ease fitting and push the tyre onto the rim after adding 45 ml of Slime Tubeless Sealant. Note there are two types of Slime, tubeless and tubes! I added this to the rim before the last part of the tyre was pushed on rather than remove the valve core, surprise, surprise, dead easy!! Now for the tricky part, inflation. First attempt with my track pump was a complete failure. Next attempt would be with my co2 inflator and this is the main reason I settled on Slime; it is the ONLY sealant that is co2 compatible! Besides having the longest claimed service life. So nervously connecting the co2 inflator and hoping for the best I pulled the trigger and with several loud pops and cracks I had my Schwalbe tubeless sitting sealed on the rim, easy as that. As I’d hoped there was plenty of room for the mudgaurds, not all tyres are equal? 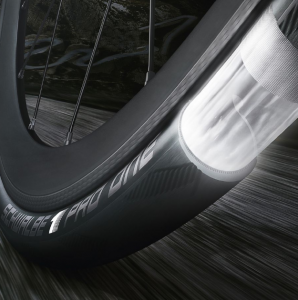 So now for a road test. I inflated to 95psi as this was where I ran the Contis and all was well, no noticeable difference which was plus as the Contis take some matching. Next drop the pressure to 80psi front and 85 psi rear, instant improvement in “feel” and comfort. On one of my regular rides without any extra effort my average speed went up from 16ish mph to over 17mph. As a guide, I weigh 76kg ready to go so that’s a work around figure. Over the next two months I was able to make an assessment of the overall performance and in a nut shell the Schwalbe tubeless outperformed the Conti in every way but particularly in comfort which translated into speed for me.

My Canyon is my summer bike and never has mudgaurds fitted so I decide to try 28mm tyres this time instead of the 25c originally fitted and as per the experience with the Ribble these tyres did indeed have clearance when fitted, however I get ahead of myself.

I followed the same procedure as for the Ribble except I used the DT Swiss Valves that came with the bike, yes, those nice people at Canyon think of everything. I had to fit tubeless rim tape to the rear wheel as the original tape fitted by DT Swiss had perforated over one of the spoke holes. I used 21mm tape for this and put the wheel in the frame to fit it as it makes tensioning the tape so much easier. First difference was the tyres were much more difficult to fit to the rims, the DT Swiss rims are 17mm wide internally and the Fulcrum Race 3’s are 14mm. I added the Slime sealant before the last section of tyre was put into place as I did on the Fulcrum rims. Now for inflation, tried the track pump, no go, co2, result !!,

Now for a road test. The reason for buying 28mm tyres was twofold, one, they should be more comfortable because of their greater volume and should give better grip for cornering and in wet conditions and as they only weigh 20 grams more than 25m tyres it seemed the way to go. Tyre pressure were set to 70psi front and 80 psi rear, if this seems low then reading the sidewall information was a revelation, one they are directional and two the pressure range is given as 60 to 95 psi!

First test was the club Saturday Intermediate and the ride feel, and comfort were outstandingly good. Second test was the Sunday Intermediate and we rode the descent from North Aston to Somerton. The descent was done at a speed I wouldn’t have considered safe with tubed tyres because of the risk of pinch flats and felt comfortable and assured on the potholed and rutted surface, the same again on the section from Somerton to Souldern where just after the M40 crossing the road is medieval. On arrival home I noticed I had a puncture, sealant was showing on the tyre surface, but I’d made it home without having to stop. Tyre pressure was down to 50psi! I left the punctured part of the tyre in contact with the ground overnight to see what would happen and the next morning on examination the puncture had sealed and all there was to show was a small amount of sealant on the garage floor. I re-inflated the tyre to 80 psi, cleaned off the sealant from the tyre casing and all seemed well.

So, as I’d lost sealant I decided to deflate the tyre to add sealant through the valve after removing the valve core and then disaster struck. As I deflated the tyre there was a series of cracks and loud popping noises like when the tyre is seating on initial fitting, the tyre came completely away from the rim. After adding sealant no amount of pumping or trying to inflate with co2 had any effect so off to the bike shop to see if their Air Shot pump could do the job and it was a complete failure too. At this point I could have left the wheel to the tender care of Chris but wanted to try to see if I could do it myself. I tried a garage airline with a Presta to Schrader adaptor fitted but that didn’t work I tried pushing the tyre towards the rim walls while using a home-made air shot device, I fitted a tube to push the tyre into position in the hope that the tyre bead would seat and after removing the tube would seat again without a tube all to no avail so back to the LBS. To get a seal the LBS had to fit two layers of gorilla tape to the rim to push the tyre up the rim wall, this worked!

So where does this leave me? In a word, demoralised! This was the first time since I was ten years old that I’d had to ask for help fitting a tyre and I didn’t like it at all. Quite why the tyre seated initially but refused to seat again is a mystery but the fact that sealant was present may be the clue as is the only thing was different to the initial fitting, the bottom line here is I’ve lost faith in the technology. Yes the ride comfort and superior rolling resistance are very attractive qualities and  come under the title of marginal gains I guess but it seems at the moment that the technology is immature and likely to leave one stranded on the roadside or fitting a tube to get home, no big deal I guess but I’m going back to tubes until Continental bring out a tubeless road tyre, it’s probably no accident that they were one of the last to bring out a tubeless MTB tyre ? There are companies like Mavic that have so called tyre and rim matched options, but I don’t believe you should have to buy tyres that you wouldn’t normally use to go tubeless. I hope my experience is helpful, I’m still riding the Schwalbes and enjoying the benefits but live in fear of a total deflation on a ride. I now have a repair kit which plugs a hole that is too large for the sealant to deal with which can be used without demounting the tyre which should be a real benefit as long as the tyre doesn’t pop off to the rim, of course I still carry a tube in my saddle bag, progress? only you can decide.

To sum up then:

Get you home even if you puncture.

You will need either co2 or an Air Shot type pump to get initial fitting.

Can be more difficult to get on the rims than standard type tyre.

Having to change the sealant on a regular basis, Schwalbe’s own sealant has only a 90 day life!!