Following heavy overnight rain and a forecast of further thunderstorms, it managed to stay dry and warm throughout Sunday, for an exciting day of racing at Banbury Star Cyclists’ Club’s annual road race.

Sponsored by Banbury’s White Horse, the morning’s 76 strong men’s cat 3/4 race saw an immediate solo breakaway from Gunther Zechmann (Team Onyx), who at the end of the first lap had a lead of almost 2 minutes. Following was a strong bunch containing all the favourites, with many it seemed clearly unaware of his large lead. However, a solo break so early on this tough 45 mile course, with three climbs of Edge Hill, is a brave and risky move. This indeed proved the case when he was eventually caught on completion of the second lap by the leading bunch of about 20 riders. They stayed together until the final climb of Edge Hill when six riders started to open up a bit of a gap on the rest. It remained that way until the finish finally resulting in a three man sprint finish with Danny Axford (Artic Tacx RT) just taking the win, something he’d also managed to achieve back in 1993. Close behind were Richard Gildea (Didcot Phoenix CC) followed by Evan Clements (Abingdon RT) in third. 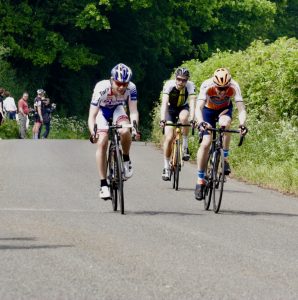 Axford, Gildea and Clements sprint towards the finish line

The women’s afternoon race is part of British Cycling’s Women’s Team Series and attracts some of the leading up and coming young riders from all over the country.

The 68 strong field, who compete on the same 3 lap course, got off to a very orderly start, with no immediate breakaways and a large bunch of riders completing the first lap together. However, by the end of the second lap the Edge Hill climb once again split the field up, as five strung out small bunches of riders formed to complete their last lap.

The first of these bunches were never really challenged on the final lap and although several riders sprinted to the line, the winner Mary Wilkinson (Ellmore Digital RT) was never in doubt. Second was Georgina Panchard (Bianchi Dana RT) with Ruth Summerford (Fusion RT) in third. 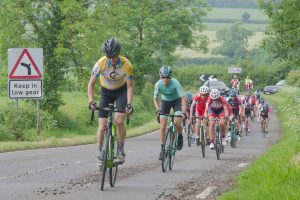 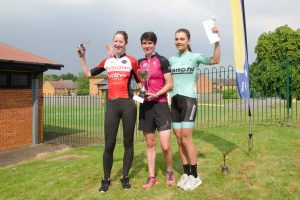 Mary Wilkinson completed her dominate day by taking the Queen of the Mountain prize, appropriately sponsored by The Castle at Edge Hill.