Member Kevin Zwolinski tells an amusing story about punctures, tubeless tyres and getting covered in goo.

Landed into Heathrow from a long haul flight earlier than scheduled on a recent Saturday; straight through passport control (the electronic checkers were all working!); bags nearly the first through; on M25 almost an hour earlier than expected.  Hang on a minute; I could make the club ride after all.

The bike tried to dissuade me, a front puncture but not completely flat.  Schwalbe tubeless tyre with the goo inside took 90psi or so, out came a squirt of said goo which sealed itself and off we go. 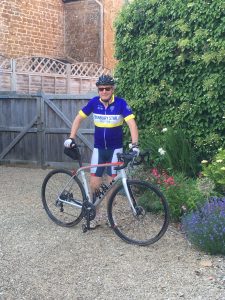 Broadribbs to The Cross isn’t far but part way around the roundabout off she went again, covering me in sticky fluid (a sunny day and the legs were out), but by the time we had turned right towards the cinema, again it sealed itself.  “Blimey, did you know you just a puncture? – that was impressive” came the cry from behind, and indeed it was impressive.  Further along the Southam Road and off she went yet again, and again.  Methinks, this isn’t going to last the ride, so I’ll about turn now and sort it out.

Back to Broadribbs, I was expecting to have to remove the tyre and extract the offending object – a shard of glass that kept re-puncturing the same sealed leak – which would otherwise continue to puncture until removed.  Worst case I may even need a new tyre.

Helpful Chris, in helpful Broadribbs, had a different and much better idea.  “Push it (the piece of glass) into the tyre and then it should seal properly.  This was something I would never have thought of, and even if I had, I did not have an appropriate ‘spike’ to do this.  A few minutes later with a loan of a spike, and a top up of air, I was back on the road.  Straight up the Southam Road and as I went over the canal bridge at Fenny, there was the café ride crossing the road ahead of me.  Carry on as if nothing happened and into the coffee stop to share the story of my eventful morning. I managed to salvage 27 miles of a ride, albeit in component form, quite a bit of which was back and forth in Banbury Town.

Why do cyclists shave their legs? I am sure there are various answers, but you try getting that sticky fluid off your hairy legs.  I now understand the pain of waxing (for clarification, I am talking legs here).  That stuff will not come off, even in the hottest bath, without picking off every individual blob of it attached firmly to leg hairs – ouch!           Separate point but getting the mess off the bike isn’t much easier, any ideas would be most gratefully received otherwise it’s the brake cleaner spray.

The moral of the story? Firstly – If you have these wonderful modern tubeless tyres, then carry a small spike device to undertake the above rescue operation, it works.  Secondly – Think again about shaving your legs, it could save some pain later on.  Who knows, there might even be an aerodynamic gain too!  Thirdly, those Broadribbs blokes are good eggs, and my grateful thanks to them.