Banbury Star CC’s evening time trial season started in March with the traditional 5 mile “Come and Try TT” at Gaydon. Now in September, 25 time trials later, the season has come to a close with the club’s final TT, using that same 5 mile format. The course, from Gaydon to the new roundabout outside Kineton and back, is deceptively undulating and with an evening crosswind this simple course proved quite challenging.

A total of 18 riders turned up to compete, a lower figure than is normal. However, this was due to a large number of members having spent a lot of the day on their bikes following the Tour of Britain riders around our local roads. 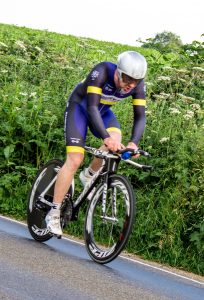 Simon Kisley wins the last club TT of the year

Simon Kisley, who has already won two of the club’s top trophies this year, finished off his season in fine style, winning again with a time of 11.47. This was 10 seconds ahead of Lee Heron in second, who was a further 10 seconds ahead of Mark Boyles in third. Fastest woman on the night was Ila Pearson on 14.54.