It was an early morning in late July 2017 as my train edged out of the British mainland’s northernmost town – Thurso – beginning my long two day journey home to Banbury.

The day before I had completed my two-week long cycling odyssey from the southernmost point of the UK to the northernmost point – Land’s End to John O’ Groats.

For some time I had dreamed of riding the UK’s most famous and well-cycled route but had procrastinated, not having the courage for the actual ‘doing’.

My 40th though provided the excuse for me to get myself into gear both literally and metaphorically speaking.

And as I sat in the train carriage on my way home, my mind was racing as I recalled the journey, while also already contemplating where I would go next.

The same had happened the year prior after I got back home from riding from home to Holland and back through Belgium and France  – I had well and truly been bitten by the touring cycling bug.

My self-confessed love affair with touring cycling began with my first trip cycling from Oxford to Brussels in 2014 to see a friend and, since then, it has not so much been a case of when but where next after each subsequent trip.

After Land’s End – John O’Groats I fancied a return to the continent and a challenge that would test me further. Having an older brother based in Tuscany gave me the perfect excuse to make Italy my goal. 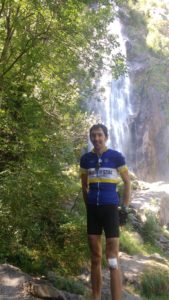 I have always been keen to support local charities through my passion and decided to raise funds for the Oxfordshire-based Katharine House Hospice, who care for people with life limiting illnesses, as my younger brother (based in Australia) had been diagnosed with cancer a few years ago. Thankfully he has made a full recovery but I’m fully aware others are not as fortunate and that the support and care that excellent hospices such as Katharine House offer them is invaluable.

After deciding upon Italy, months of carefully planning cycle-friendly routes across the continent ensued, (not helped by the fact that Google does not provide cycle routes for Italy), booking cheap accommodation, a ferry journey across the English Channel and a flight back, I was all set….or so I thought…

It’s funny how life has a habit of throwing the occasional spanner in the works when you least expect it.

..and so it was as I had an accident three weeks prior to me leaving – ironically falling over running to Banbury Park Run and getting a hole in my knee which required hospital treatment.

It meant the days leading up to my departure were a nail-biting period of mental anguish and regular medical appointments for dressing changes, as I weighed up whether or not I would be fit to ride.

By the week before my intended departure I had even got to the stage of drawing up an alternative plan of making the journey by public transport as it became clear my wound would not heal fully in time.

Eventually though I decided to take the risk and go, following to the letter the advice of my nurse in managing my wound on the road. It just meant allowing a little extra room in my tightly-packed saddle-bag for special dressings.

It was probably one of the best decisions I have ever made as the resulting two weeks of cycling were some of the most life-affirming, joyous and exhilarating days of my life to date and give me a warm glow recalling them. It was the same with the Land’s End John O’Groats trip, even now.

I confess that naturally I’m not a very confident person in life and this is something. However, whenever I have been on cycling adventures on my bike, I seem to have been blessed with good fortune which has filled me with confidence in its own right. (This is conveniently bypassing my initial foray into touring cycling from Oxford to Brussels for the sake of not digressing too much from the story. For the record, I got lost between Bruges and Brussels and ended up getting to my friend’s house at 10.30pm instead of 5.30pm, soaking wet after getting caught in torrential rain and bloodied having come off crossing tram tracks!..)

There were moments during my ride from Banbury to Florence I could have been caught in bad weather, had numerous punctures, got lost, or even come a cropper on some of Italy’s hideously maintained roads that more resembled lunar landscapes than anything remotely like a safe surface for vehicles to pass along, however my ride passed without mishap.

And I realised as I arrived in Florence that I had been riding with a bike pump that was gradually falling apart along the way and was not fit for purpose, yet it didn’t and my tyres remained blissfully puncture free.

Okay, there were moments such as when I was crossing the Apennines on my final day riding into Florence when the forecast of heavy rain I had seen days stubbornly refused to change. I had thought my good luck was finally up as the clouds loomed ominously overhead and thunder rumbled.

However the downpours were mercifully brief and insufficient to warrant me breaking out my raincoat. Instead, as I made it over the Apennines, I was treated to a thrilling finale rapidly following a convoy of motorcyclists around a swift succession of hairpin bends into the Tuscan capital.

I wish I could say the Italian drivers were as merciful as the weather but the majority of my time in Italy was spent battling with motorists for road space, being largely compensated by my final day’s riding immersed in the picturesque Tuscan countryside.

I had mentally prepared myself for the first two days of the trip which I knew would be tough and stressful – first cycling over 120 miles to get from Banbury to the south coast (via a lunch stop at Reading with friends). Then a very early start the next day from Littlehampton in order to reach Newhaven to catch the ferry to French shores.

But even tackling the Glenshee Pass in the Cairngorms – the UK’s highest main road – on my Land’s End to John O’ Groats journey, could prepare me little for what I was about encounter, cycling across two countries and two mountain ranges to reach the Tuscan capital.

The Alps crossing was always going to be tough and I can’t say the hour-and-a-half or more of constant spinning up the 2,478 metre-high Nufenen Pass wasn’t challenging but it was difficult not to be spurred along by the uplifting scenery.

While not as tortuously steep, the Apennine crossing also proved testing as mentioned as I edged further south and the mercury rose, the heat adding another dimension to the multi-faceted challenge.

Going across a construction site for a motorway on day 14 riding between Piacenza and Modena to avoid an otherwise long detour circumnavigating Parma was one of the more eyebrow-raising moments of the trip. My Garmin seemed to have a knack of throwing in the occasional off-road section throughout the trip to keep me on my toes.

Trip highlights were too numerous to mention all of them here. There was the glorious weather throughout and the stunning scenery along the way – whether it be cycling the shores of Lake Geneva in Switzerland and Lake Como, seeing the Aletsch Glacier by cable car from Switzerland, riding along blissfully tranquil canal paths in rural France or weaving my way through the magnificent Alpine landscape. 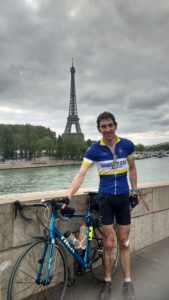 Regularly indulging in decadently delightful pastries, cakes and numerous gelatos that my cycling could justify without the accompanying guilt was also a bonus, as well as the kindness of strangers – particularly those who gave me water to quench my thirst as the intense heat took its toll in the latter stages of the journey.

Arriving early enough at my end destinations for each day also meant I had ample time to explore some of the continent’s architectural jewels. There was Rouen’s characteristic half-timbered houses and the soft colours and grandiose structures in Italian cities such as Modena and Piacenza as well as iconic buildings such as Paris’s Eiffel Tower and Florence’s magnificently imposing Duomo.

By the time I reached Florence I had spent 14 days in the saddle – punctuated by a rest day spent sightseeing in Geneva with my Swiss friend Sandra – and had covered around 1,200 miles

But, rather than feeling relieved as Florence appeared in sight, it was with mixed emotions that I negotiated its tourist-packed streets to make my way to the Duomo.

As I held my bike aloft in triumph in front of the city’s stunning cathedral, I was elated that I had made it without mishap but also emotional that the latest chapter in my cycling adventures had drawn to a close.

The next day I met my older brother for some city sightseeing. It was with a heavy heart that I handed over my faithful steed for the last two weeks to him and let the plane take the strain for my return journey the next day. 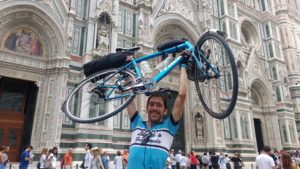 I’ll be reunited with my bike when my brother returns to England at the end of the month and am already wondering where it might take me next for my inevitable trip next week – around Ireland; through Spain and Portugal; through Scandinavia…the opportunities are endless!

I undertook the ride for the Adderbury-based Katharine House Hospice, which provides specialist palliative care for adults with life limiting conditions across North Oxfordshire, South Northamptonshire & South Warwickshire.. If you would like to sponsor me and donate to this very worthy cause, please visit my online fundraising page: https://www.justgiving.com/fundraising/BAN-IT2018-Joby