Fifteen year old Katie Pamphlett only joined the club in April this year, yet in only her second race she recently made the podium with an excellent third place finish. Katie had previously only entered one time trial and an adult women’s race, so had little competition experience.

It was suggested she try a race with the Reading based youth club, Palmer Park Velo, who were holding a youth crit race on the closed road circuit at Dalton Barracks, Abingdon. The event catered for various age groups and Katie took part in the combined U-14 and U-16 race. The race duration was 45 minutes, plus 5 laps, amounting to a total distance of around 15 miles.

Katie unfortunately made a poor start; when she couldn’t get her feet properly secured in her cleats and saw the field disappear before her.  At the first corner she could see that three girls were already opening up a gap at the front, but with a big effort Katie managed to reel in other riders and then gradually work with them to move her way up the field. Whilst she had periods of riding on her own, Katie’s determination eventually got her up with what was now a leading duo, where she even took a few turns on the front. 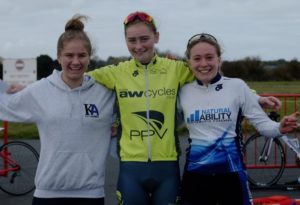 Having never been in this position before, she wasn’t totally prepared for how and when to start the sprint to the finish on the final lap. However, she managed to retain her third place behind two experienced girls from the organising club, which was a great effort in her first youth race.