The club enjoyed probably its best ever Wednesday evening time trial last night with a record maximum 60 rider entry. The reason, near perfect early summer time trialling conditions, but more importantly, the chance to witness the talents of two of the country’s top time trialers – Dan Bigham (Ribble Pro Cycling) and Charlie Quarterman (Holdsworth-Zappi). Both will compete in the British Time Trial Championship next month with 20 year Quarterman also about to ride in the Under23 Giro d’Italia.

Dan broke the 5 year old K4/20 course record last year, but Charlie came very close to the record last month, so an eagerly awaited challenge was made. The pair didn’t disappoint, starting this time with a 2 minute interval, they set off at a terrific pace. What was even more amazing was their identical finishing time of 24.42, which experienced time keeper Keri Williams could not split. This knocked a further 39 seconds off Dan’s previous record and gave them both an average speed for the 13m/20km course of 30.19mph/48.58kph. 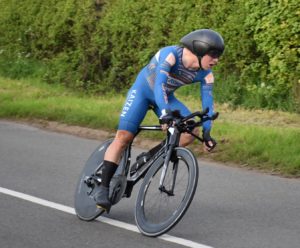 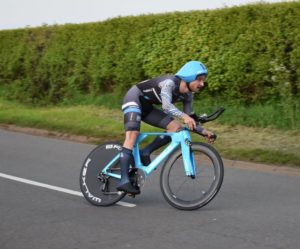 There were other good performances on the night with a further 10 riders getting below the 30 minute barrier and many setting PBs. Tobias Wiesand was the first Star rider home in 5th place, with Simon Bull in 8th and Stuart Quick 12th.

Sixteen women competed and again young Lydia Watts was fastest with a time of 31.15. It was close behind though, with Naomi de Pennington and Annie Heaney finishing within 3 seconds of one another in second and third.

Dan Bigham Having ridden a lot of club TTs nothing comes close to the Banbury Star 13! Thanks for putting on a top evening. I’ll try my best to get back in July 🤞🏼