Gerard Henry and Leah Dixon took the honours in the club’s annual road races on Sunday.

On a day when rain showers were forecast the 45 mile three lap course remained dry for most of the day, with a moderate crosswind on the long B4100 section. A brief, but heavy shower did arrive however during the closing stages of the men’s race, which undoubtedly had a bearing on the result.

Sponsored by Banbury’s White Horse, the morning’s 76 strong men’s race got off to a fast start, with three main groups quickly forming. At the end of the first lap, the leading group of  sixteen riders had a 20 second gap on a solo rider, who in turn was 15 seconds ahead of what was the largest group of around twenty seven riders. The third group of twenty riders were a further 20 seconds back, with the remainder of the field already getting strung out.

During the second lap the leading group continued to open up the gap on the rest of the field, although their number dropped to twelve riders. It was already clear that the winner would emerge from this strong group. Jacques Coates (Cycle Team OnForm) was already showing his strength climbing to the top of Edge Hill first on both laps. At the end of the second lap their lead was a minute on the second group which had now shrunk to eighteen riders.

The third and final lap promised a real battle between this strong leading group, with Coates again showing his commitment, cresting Edge Hill first and therefore rewarding him with the Banbury Bike Box Hire, King of the Mountains prize. However, the first signs of a rain shower were already evident and as this leading  twelve rider group tackled the fast descent into the now wet roads of Horley, young junior rider Jacob Hardy (Cheltenham & County CC) crashed taking a couple of other riders with him. With less than a mile now left to go, if was left to the remaining seven riders to contest the sprint to the finish. A well timed push up the final incline saw Gerard Henry (University of Warwick) take the victory from the strong climbing Jacques Coates, with Hardriders TT winner Jack O’Neill (Team Jewson) in third. 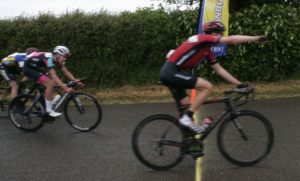 The men’s finish – Henry, Coates and O’Neill cross the line

The women’s race was again part of British Cycling’s Women’s Team Series attracting some of the top UK teams and young riders. The 52 rider strong field, which compete on the same course as the men, initially got off to a fast and orderly start. However this was not to last, as after the Edge hill climb the British Cycling Commissaires, who adjudicate and manage the race, brought the race to a temporary stop. They were not happy with the road discipline of some of the riders and delivered a firm lecture before the race was restarted. 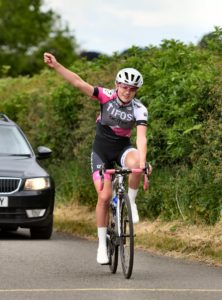 As a result of this the whole field started their second lap almost as one. This lap then saw the field start to string out, with around seventeen riders starting to open up a gap at the front. As the riders started their last lap a group of five were 12 seconds ahead of a group of twelve with the remainder of the field now well strung out. The final lap saw the first two groups start to merge again with the final climb up Edge hill closely fought out. However after this eventual winner, Leah Dixon (Brother UK-Tifosi), started to make her break for the lead, crossing the line to win by a clear 26 seconds. Kate Wootton (Cycle Team OnForm Junior), who also won the Castle at Edgehill, Queen of the Mountains prize, was second, just ahead of  Hannah Larbalestier (Team Boompods) in third.