Club ride leader Andy Perry writes another blog, this time on the merits of a smart turbo trainer

But, but, but; riding a turbo is boring? Yes, it sure can be, but it’s a means to an end and with everything you can now do with smart trainers, even the boredom has lessened. Also remember that Matt Stephens used a turbo extensively when training en route to becoming British Champion as he was holding down a full time job as well.

But, but, but; it’s not really riding a bike. Well, it kind of is. You still turn the pedals; it still gets you out of breath, still makes you sweat and the complaining my legs do afterwards feels very real.

But, but, but; it’s not like riding outdoors. Correct, it’s no substitute for actually riding outdoors, but it’s better than doing nothing when the weather is too bad to go out.

Even the UCI now recognise the indoor cycling brigade!

First of all e-cycling, which has seen huge growth in the last few years and is enjoyed by a growing cross-section of cyclists. A number of fun apps have been developed along with smart trainers, and people are taking up the sport in large numbers, attracted by the many advantages it has to offer. Enthusiasts of e-cycling can train and take part in races (some take place on routes used at previous UCI Road World Championships), in a very realistic manner and as part of a network, regardless of the weather outdoors. The UCI must support and promote this growing trend, which is why we have included e-cycling in our Regulations and are organising the first UCI e-cycling World Championships in 2020.

In my first blog I talk about the loss of fitness suffered over the winter months of doing nothing. What I didn’t say was that the first ride out after that winter, I got 3 ½ miles up the road and had to stop because my chest was hurting too much, so I rested and came home again. It was nothing medical as I had it checked out, but I had just gotten that unfit in such a short period of time. As the next winter approached, I vowed not to come out of it in the same condition. I started to think through the various options;

Go to the gym – hate them

Take up running – not a chance

Get a turbo trainer. Now that was an interesting idea. At least it meant I would still be on the bike. But what to get;

Wheel off – Very expensive, don’t see the wife going for that idea!

Wheel on – OK, seems like a nice idea as I don’t have to keep messing about switching between indoors and outdoors (I was taking this decision before smart trainers were even a thing!)

So that was it, much research and finally I bought myself a Tacx Vortex. I set the turbo up in the garage and hooked my bike onto it. Put some music on and rode. My word it was dull. I managed to agree with the wife that I could get a small upgrade and add computer software to the setup, giving a much better experience and access to many varied training plans. As the winter crept on, it got so cold it started to become painful to breathe and then there was the effort of moving the computer in and out of the garage as well. I’ve said it before, and I’ll say it again, I’m a lucky son of gun as I have a very understanding wife. She let me move the turbo in from the garage and up into our spare bedroom! Unfortunately, being a wheel on trainer it made quite a “rumble” Eventually I cleared a space in the corner of the kitchen that we didn’t really use and moved it down there. Now I had a corner with double aspect windows and a TV for company along with a computer in front of me. I was in training heaven! Many happy hours spent on the bike in the kitchen training myself for higher cadence, increasing my general endurance and working on my threshold power. The “pain cave” became my “pleasure room” – no, not that kind, that’s an entirely different blog!! 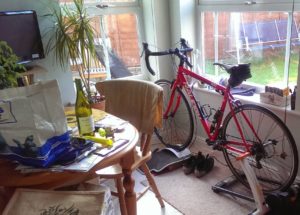 My home set up

I spent a number of years very happily using my wheel on turbo but gradually seeing more and more about smart trainers and the various applications coming out to make most use of them, SufferFest, Trainerroad, Zwift, to name just a few, that started to look very interesting. So, I invested in a Tacx Neo direct drive smart trainer and Zwift. My Oh My, what a revelation! For those that don’t know, Zwift is an online community of indoor cyclists. There are organised group rides, organised training sessions, workouts and full on multi-week training plans for just about any kind of cyclist. I’ve gotten to the point now that if a club ride is cancelled then I’ll spend the same time on the turbo instead. It’s just part of my routine now.

Over this last winter I also decided to commit to a proper structured training plan for the first time ever. I did a 4 week with 5 hours per week, followed by a more adventurous 12 weeks with 5 hours per week. This was alongside my normal club rides and fitted in around working life where I would ride after work. Indoor training is that flexible. My overall fitness, strength, power and endurance have significantly improved with a number of people commenting during our club rides so it’s always nice to have it recognised. I will continue to use mine as much as possible and use as many of the various applications to help improve my cycling further.

I would wholeheartedly recommend a smart trainer to everyone that isn’t able to ride outside everyday or has specific training goals or just wants to maintain fitness during the cold months. If anyone has any questions, I’m no expert, but more than happy to share my opinion and experiences further.