Earlier this month we reported on Stuart Quick’s two crit races in as many weeks – he’s certainly been active this summer, competing in both another crit race and an Open TT last week.

On a hot Thursday evening he was back at Milton Keynes Bowl, where a much reduced field started the Cat 4 race. Due to the heat the race length was reduced to 30 mins and 3 laps. Stuart tried several attacks early on as did other riders, but no one got away. After about ten minutes there was a brief shower, which cooled the temperature a bit. However, it did make the sweeping turn after the small descent a bit sketchy and after about 20 minutes there was a crash in the ladies race at this corner, leaving one rider down needing treatment. Everyone eased up for a few laps to make sure racing could continue, which it did, but with everyone just taking it easy on this bend. There were no further attacks with the field all readying for the final lap. Stuart was in third place as they came to the incline to the finish and then went early just as the climb started. Unfortunately, in spite of a great effort, he just got beaten a few meters from the line into a still well-deserved second place. 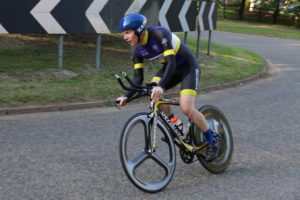 Stuart in action on his TT bike

Then on the following Saturday he was off to Rugby Racing Cycling Club’s Open 10 TT. The course was the out and back A45 KK11/10T course between Dunchurch and Coventry and Stuart’s first visit to this venue. With the morning and early afternoon rain putting quite a few people off only about half the field started. However by the time of Stuart’s time the rain had stopped, although the roads were damp and the wind was quite gusty. Nonetheless, he was pleased with his time of 23:15 (a PB for a 10 miler this year) and finished a creditable 13th overall.