Recently crowned National U23 TT champion Charlie Quarterman teamed up with local rider Lydia Watts – who finished 10th in the Women’s U23 championship – to dominate the club’s final 2Up TT of the year. It’s not often a club gets the honour of a rider competing in their weekly TT wearing the red, white and blue striped jersey of a British Champion – thanks Charlie. 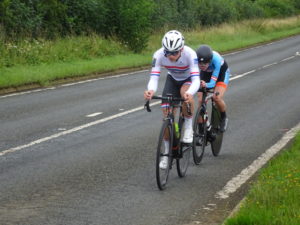 Whilst the TT was held in almost fully dry conditions, a day of constant rain beforehand clearly reduced this normally popular event to only seven teams. Charlie and Lydia’s time was an impressive 26.51, over 3 minutes ahead of two more U23 riders, Rhys James and Gregor Kelling in second. Third place went to the all-female duo of Annie Heaney and Denise Shepherd, with father and son Mike and Harry Kirby in fourth.