From a standing start at the top of Hempton hill, there is only one rule to this competition – no pedalling. The speed picks up soon enough and is hopefully fast enough to propel the rider over a small rise and then through a series of bends before the home straight where riders who have made it this far gradually grind to a halt. The rider who goes the furthest wins.

However, at this year’s event a strong headwind, right from the start, resulted in only four riders managing to crest the mid-course rise. First over and setting a benchmark was Steve Lee and it looked for some time that he might be unchallenged. Towards the end though he was joined by Simon Furneaux, who beat him by a couple of metres and then last year’s runner-up Darrel Foulk, a similar distance ahead. Last man down is always the current holder and Ian Maconnachie used his skill and weight to score another clear win of around 30 metres and retain the Trinders Trophy. 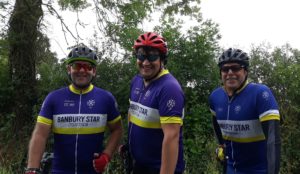 Don’t forget the last event of the year is the Durran Cup Hillclimb – part of the Saturday morning club ride on 7th September at 11am. It’s only 700 metres and the outright record is 59 seconds, club record 1 minute 4 seconds.