Organised this year by Cowley Road Condors, this is a handicap event held on the H25/17 course running up and back along the A420. This annual competition has been running since 1951 with links to the Dutch racing team Leiden Swift, and has been won by Banbury several times over the years. However, last year after dominance by Banbury Star, Bicester Millennium took the spoils, meaning that today’s competition was going to be a hard fought race from the off. 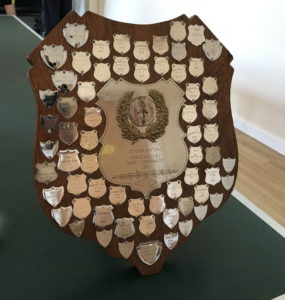 The Leiden Plaque – back in safe hands

Dry and sunny conditions greeted the riders on this rolling course, but they were met with a strong cross headwind on the way out, before making the turn at the 13 mile mark to return with the assistance of a cross tailwind for the remaining 12 miles.

There were some very fast times across the field, however with some good handicap times, Banbury were able to claim a clean sweep with Star riders Marcus Edmans, Rob Paul, Martin Kelly and Jane Hotlon all winning Handicap Prizes. The combined team times were enough for Banbury Star to take first place in the standings overall and thus take back the trophy the club last won in 2017.

Well done to all who competed. We’re also pleased to be able to report that Mery is now home and although a bit battered and bruised, has no broken bones. The club wishes her a speedy recovery.