A grey sky and a short heavy shower greeted the 32 riders who turned out for the club’s final Wednesday night time trial of the year – the 5 mile Come & Try TT at Gaydon. Thankfully the rain abated by the time of the start and most of the course between Gaydon and the turning point at Kineton was dry. However, the fresh breeze provided a challenge on the outward leg, but with some relief on the return leg to the finish.

National U23 champion Charlie Quarterman again joined us for this final TT, hot on the news that he’s just been signed by World tour cycle team Trek-Segafredo for next year. Charlie has already smashed two course records this season, so it was no surprise, that even in not ideal conditions, he took 47 seconds out of the existing 5 mile record, with a sub 10 minute time of 9.45. 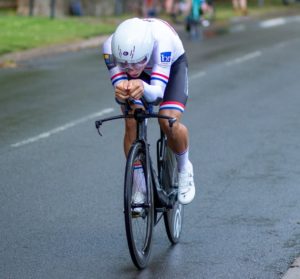 Another win, another record for Charlie (photo – Mark Duplock)

Another great effort came from occasional visitor Sam Harding who again turned up on his fixed wheel bike which he rode to second place with a time of 10.57. The first club rider home was young Luke Sherlock in third on 11.25.

The battle amongst the women was very close with Lydia Watts on 12.12 – just 6 seconds shy of the women’s outright record – who just beat Naomi de Pennington by 3 seconds. However, as a first claim club member, Naomi did break the club record, which ironically Lydia held.

The Come & Try TT is all about trying to encourage riders to give time trialling a go, so special mention should go to Lydia’s father Jonathon, who borrowed his daughter’s old bike to ride his first TT. Also to 14 year old Peggy Simpkins and 15 year old Isla Mason who both set respectable times. 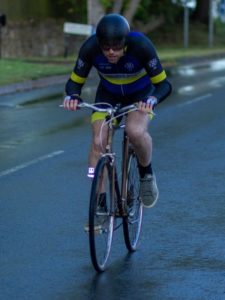 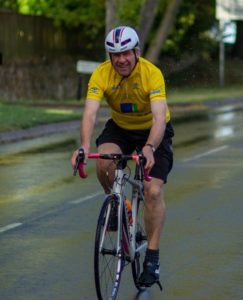