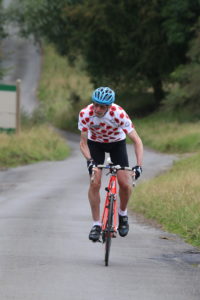 If you’re one of life’s natural mountain goats then you’ll be glad to know we’ve saved the best for last as the shortest TT of the year – the Banbury Star CC Hill Climb with the Durran Cup up for grabs – has moved from its usual Wednesday evening slot to this coming Saturday. It’s a mere 450 metre sprint from the bottom of Burton Dasset hill up to (almost) the top and it’s where the lightweights get their revenge on the FLABS who dominated the recent downhill challenge.

The climb was ridden up this year as part of the Women’s OVO Tour of Britain and features as the finish for the men’s Tour next week so let’s show those pros just how it’s done as we conclude our summer season of races. The hill climb is open to all riders, you don’t have to be a Banbury Star member to take part, and the good news gets even better as it’s free to enter too.

Oli Wright has taken over timekeeping duties from Keri and he will start sign-on at 1015 at the layby just by the cattle grid at the bottom of the climb. The first rider will be off at 1101. If you want to ride out to Burton Dassett as part of the club ride, we will be meeting at Broadribbs Cycles in Banbury at 0945, leaving at 1000.

More details, Garmin maps of all our TT courses and the TT calendar/marshal roster can be found here.