The last event of the club’s 2019 season, the annual Durran Cup hill climb, attracted a field of 23 riders on Saturday morning at Burton Dassett. The short, but steep climb is only 700 metres in length, on a section of the hill that will comprise the finish area for Stage 7 of next week’s OVO Tour of Britain race.

Luke Sherlock was again fastest up the hill with a time of 1.03 – 3 seconds quicker than he managed last year – but more importantly just 1 second quicker than the club record set by Peter Dumbreck in 2016. He was closely followed for the second year running by visitor Sam Harding, who with only the one gear on his fixed wheel bike, was 4 seconds quicker than he managed last year with a time of 1.08, narrowly beating third placed rider Gerard Henry by 1 second. 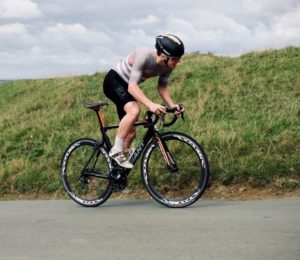 Records were the order of the day, as Naomi de Pennington finished off a five course record breaking season by lowering her existing outright and club women’s record by 8 seconds with a time of 1.30.