Member Lee Heron gives us the inside story on his recent challenge – riding a 12 hour, 222 mile time trial

Time trials are known as the race of truth. You can’t hide in the pack, slipstream or freewheel. You race every pedal stroke. Be it the Come & Try 5 mile TT hosted by our club or any Open TT you enter.

On the 8th of September I embarked on my longest race of truth, inflicting more pain on myself in the pursuit of my cycling ‘hobby’ than I ever have before. The challenge was to ride a 12 Hour time trial in Kent.

Simply looking at Strava, you will see that I achieved that goal, clocking up 222 miles in the process (less a few hundred metre detour to the car to grab some water). This however, only tells part of the story.

In order to take on this kind of endurance challenge you really should train. You should focus on increasing your power output on short to medium rides and also on riding for extended periods of time, at reduced power levels so that you have a base endurance level to rely on during the event itself. You should also practice the logistics – feeding, hydration, when to stop and how long for. It’s fair to say that I was not as prepared as I should have been. 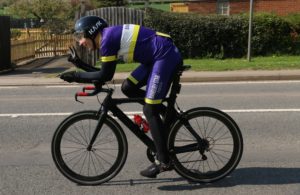 This is a photo of a happy Lee riding in a club TT – but did he look like this in Kent?

My race schedule for 2019 has been rather full, so weekends where ‘big mile’ rides can be completed have been few and far between. Due to the distance and frequency of my time trials this year, my FTP (yawn) has increased so at least that part of the training went well. Nutrition and hydration, while on a long ride remain difficult to measure. After a while, you don’t want either – you just feel sick!

One obstacle that I thought would prevent me from racing cropped up just two weeks before the race. I had taken an afternoon off work in order to get a century ride in. After 70 or so miles, my left knee started to ache. It was an aggravation to an old sporting injury that lead to me stopping playing rugby about 6 years ago. The knee seamed to improve so the following week another longish ride was planned. After 35 miles, the pain returned. Shame I have 35 miles to ride home from there. That weekend was the BSCC Open 10 mile TT. There was no way I’d miss that, so I dug in and finished the ride. That Sunday, a gentle recovery ride was planned and after 6 miles the knee screamed stop! From that point on it was a case of rest and crossing fingers. Will I ride or not? Thanks to Ibuprofen, I completed the ride.

On Sunday morning, my race began at 06:26. The course, which had consisted on 4 different loops, had been changed due to roadworks, it was now down to three. The 18 mile ‘out and back’ course from the start to Ashford was completed four times, rather than once. This route had a few hills, which were not welcome on a TT route.

After the out and back we were directed onto the larger lop from Breznett through Camber Sands, to Lydd, along possibly the most excruciating patch of road in the country.  Approximately 6 miles of old concrete road with a thin veneer of tar, every 5 meters held a jarring lump-dump as the wheels clattered across the ruts. After 5 laps, my time on the Camber route came to an end – thankfully.

With just over 3 hours of the TT remaining, we were directed to the finishing loop. A 10 mile loop with the timekeepers posted at intervals. The support from the timekeepers was very welcome I have to say. When entering my final lap, I was informed that there was 19 minutes left. My target was in reach with a 4 mile push. I got past that timekeeper with 5 minutes remaining. Another target was in sight so I picked up my pace. And then… It was over, less the 4 mile ride back to HQ.

All that hard work, the relentless hours in the saddle and it was done. No flags, no whistles, no helpers handing out medals and freebies from race sponsors. Just a guy, in a deckchair with a stopwatch, a smile and a “well done”.

The battle against the road and wind was one thing but the mental challenge outweighed the rest. Try doing the same thing for 12 hours with only 4 breaks totalling 8.5 minutes. Frankly it was crushing. A ‘decent’ ride typically lasts 3 hours, yet at that point, in this race, you’ve only completed a quarter of the ride duration. The discomfort on the bike was something that I’ve never before experienced. Every fibre ached. I have blisters upon blisters in some delicate areas. I was so badly drained that after I got home, emptied the car and showered, I could only manage to drink half a glass of wine.

What I found remarkable and inspiring was the span in age and ability of the competitors. Not a big field of entrants, but great to see who rode. There were of course the serious athletes. One of whom rode over 278 miles. I don’t know if he even won. At the other end of the spectrum where two guys, in their seventies riding trikes. In between was the typical spread of club riders on road bikes, TT machines and even a few ‘fixees’

Now it’s done. Under prepared, fearing a DNF due to injury, but it’s done. I look towards the next challenge, a meagre 10 mile TT near Stratford on Saturday, en route to the big target.  That’s to top the 1000 miles of Open TT’s this year. It will  take 28 races to notch up that total, knee permitting. So far, 21 down with 7 remaining.

The race of truth? The big truth after that 12 hour ride is that it was the biggest mental and physical sporting challenge I’ve undertaken and I’ll never, ever do it again!