The club’s illustrious TT time keeper Keri Williams, now rested from his 2019 season, has sat down and compiled this light hearted commentary on some of the people that took part and made it happen.

Just completing our yearly time trial review, it occurs to us that some non-racers may appreciate a “who’s who” on the club’s racing elite and so we have highlighted below a few of The Stars’ stars.

Keri “The Timekeeper” Williams: Of uncertain age  … well he’s not certain, so we can’t say for sure. Keri apparently did some cycling “back in the day” in his native Wales. “The day” is however believed to be early Edwardian and as Wales at that time could only afford three bikes for the entire nation, his claims to have been in the country’s elite, are maybe not really that impressive. Timekeeps most events and is always right!

“Bionic” Bill Ord: Now only 49% human, Bill is a club stalwart. Created by the boffins at Kraft sometime during the last century, Bill proved himself more than capable of kicking a few younger backsides this year, although that may have been as a result of some unappreciated age jokes.

Mery “No 1″ Wolke: Mad Dutch woman insists on being Number 1 as she has to get home early to walk the dogs. Currently recuperating after trying to “bunny hop” a car, which was slowing her up in the Leiden Plaque. Do not mess with Mery!

Roger “No 2” Gollicker: Nick name certainly not Cockney slang related, Roger provides back up to Keri for all time trials and is, in fact, a total “diamond geezer”. Is also the club scribe, so be nice to him if you want your name to appear correctly in The Banbury Guardian.

Ila “Buttercup” Pearson. So called in memorial of a male sportive rider who apparently enquired how “Buttercup” was doing on a ride! Fearsome competitor but does have some deviant triathlon ways. Allergic to being pushed off at the start. 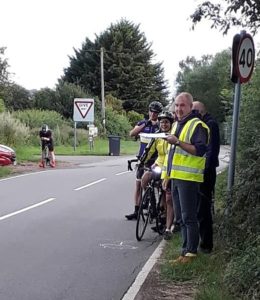 Paul “El Presidente” Dean: Far more important than Donald Trump and certainly has better hair. The brains behind the club and a man with a plan for all seasons.

Toby “Big Air” Heron: Toby unfortunately has not raced much this year, as being a teenager, club events are now “soooo boooring” and anyway, if we won’t allow him to jump over at least 6 buses, he doesn’t want to play anymore.

Lee “No ‘air” Heron. Father of Toby, Lee is one of the club’s hard men and will now only race in events in which the timekeeper needs a calendar and hour glass to record finishing times.

Simon “Orca” Bull. One of the club’s fast men, Simon has had a fantastic year in the TT’s. His nick name refers not just to his killer instinct, but he also races on sonar, locking on to the breathing of his minute men from afar and chasing them down one by one.

Manuuu “Don’t push me” Heraud: Not strictly a Star rider, being one of those Team Cherwell triathlon types. Manu is a much loved regular, although he is currently banned from receiving a pushed start, following his last attempt, which saw him veer off left and run over The Timekeeper.

Oli Wright: Reserve timekeeper and Gloucesterrrr Rugby fan. All round solid chap. takes over to allow Keri to have a holiday and we won’t hear a word said against him.

Team Heaney: Terrific Team Cherwell double act, both of whom have had fantastic seasons on the bike. Never seen in the same car together though, which leads us to believe one of them is a really scary driver, but we are not sure which, best ride home if one of them offers you a lift!

Naomi de Pennington: Another rider who has had a fantastic season. Naomi is a vet and assures us that the empty boxes of Ketamine in her car are purely work related and anyway have neigh side effects at all, although we did have to award her four faults for a refusal to start the A5 Interclub this year.

Mike “The Power” Gillett: A rare visitor to our TTs, as he usually spends his evenings ripping up phone books and uprooting trees. Produces more power whilst riding, than the Didcot power station ever did.

Simon “Just in Time” Kisley: Been racing forever and has won most of the club’s trophies at some point. Simon is actually incredibly punctual, turning up for races sometimes hours in advance, but he enjoys winding The Timekeeper up, usually hiding in the bushes, before appearing at sign on with only 30 seconds to spare.

Ed “The saddle” Antoniak: Noted for his retro bike inc a saddle hand chiselled out of leather, which he borrows from Frankie Dettori each Wednesday night.

Lydia “er royal highness” Watts. The closest thing to royalty the club has, no longer a club first claim member as that is just ” too common”, but is super quick around a TT course. A recent crash, where the blood ran red though, has raised some doubt about quite how royal she really is.

Denise ” Bandit” Shepherd: Another of our friends from Team Cherwell, Denise usually claims on sign in, that she has never ridden a bike, is as a slow as a slow thing with a flat tyre and indeed is suffering from flu, before setting yet another pb! Known to also be a good runner, swimmer and tennis player, we’d suggest it’s probably best never to play poker against her.

Ian “The Brains” Maconnachie: The cleverest of Star riders, Ian worked out early on that the best trophy to win on a “reward v effort” ratio was the downhill cup and has won it every year since. Has promised to secure the Holy Grail of club doubles … the hill climb and downhill trophies…. in 2020.

Andrew “sick note” Wallwork: An, as yet, unfulfilled talent due to his propensity to break himself or his bike every season, just as he is starting to go well. Has promised to wrap himself up in cotton wool this winter for a stunning 2020, but that may just be a personal deviance.

Matt “the money” Sleath. Club treasurer. Assures us that his many trips abroad are required to check on our offshore assets, although recent two wheeled purchases have raised some questions that the club’s assets may now rest somewhat closer to home.

Charlie Quarterman/Dan Bingham.. The club’s adopted pros. Not officially club members, but don’t tell anyone, as both form part of El Presidente’s plans for world domination of all Interclub events next year.

There are of course many more riders who race but as they are more litigious and apparently know some really good lawyers.. we thought it best we not mention them here!

The full results of each individual TT for the whole 2019 season can be found here: