Twelve riders from the club, forming three teams – BSCC-U25, Team Stars and Team Stars Too (the latter two mixed) – started the Red Bull Timelaps event at 12 noon on Saturday lunchtime. The course was a technical and rolling course with one punchy, but short climb, and a longer ‘draggy’ climb towards the end of each lap.

A thousand riders, split across various categories raced on a closed 6.7km circuit, in Windsor Great Park, aiming to complete as many laps as possible in 25 hours, in a bid to be crowned Red Bull Timelap champions

Each team were allowed one rider on the track at any one point in time with a pit lane changeover to the next rider at a time to suit.  The strategy for the mixed teams was based on spending an hour or so on the course before handing over. The U25s strategy was a bit more of a ‘see how it goes’ formula, but based on around 90 minutes before changing. The first few hours were pretty brutal. If it had been a club ride then it would have been cancelled. Everyone got soaked in the constant wind and rain. It was a case of holding on against the wind and trying to get cover in a group wherever possible. 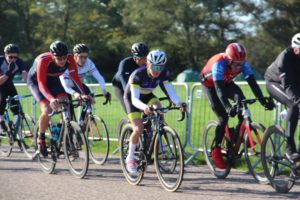 Tobi Ng (along with team mates Luke Sherlock, Dan Reynolds and Will Stowell) put in a great performance

With the challenging conditions punctures and mechanical issues were a major issue for lots of teams and Banbury Stars were not exempt from this with both time and laps lost for the U25s and one of the mixed teams.

From approximately 9pm the wind died down, but it then turned very cold, and overnight it was all about keeping warm. The night time stint for all team members was a case of balancing rest and sleep time with racing time.

All teams were changing riders regularly to try and maximise speed over fatigue, especially with the cold and wet kit. The ‘Golden Hour’ started as the clocks went back with each lap of a smaller course coming into play and with each lap counting double. One nominated member was tasked with getting as many laps in as possible.

As the sun rose the morning was very pleasant, albeit still with wet shoes and kit for the majority, but still the pace didn’t let up. There were a number of professional teams, including Pavel Sivakov from Team Ineos and Alex Dowsett and the competition at the front was very fierce. 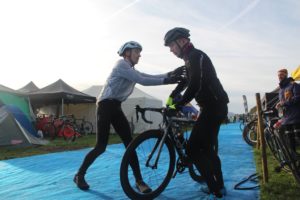 With regular updates on placings the U25 team were doing incredibly well, at one stage during the evening, reaching 8th place. Unfortunately however, an untimely puncture or two pushed the team back in the order. Eventually they finished in an incredible 14th place overall, out of 224 finishing teams, completing a total of 132 laps. The mixed teams both completed 111 laps, however the time Team Stars Too completed these total laps was 4 minutes quicker than Team Stars. Just to illustrate how close a lot of teams were, this put their finishing positions at a very credible 109th and 113th places.

The Banbury Star rider teams were;