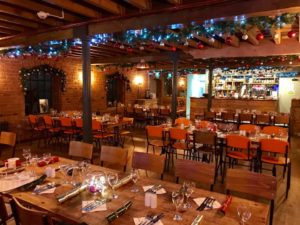 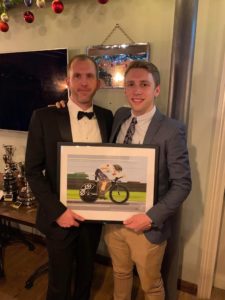 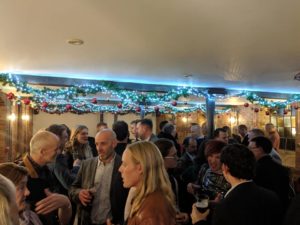 The club’s 2019 annual dinner and trophy award evening was held on Friday at a new venue for the club – the Hook Norton brewery which is one of the few venues big enough to be able to cater for our club. Mark Davies has posted an album of all the winners here.

Our special guest for the evening was Charlie Quarterman who started the 2019 season by coming along to some of our Wednesday evening time trials, breaking long-held club records along the way and ended the year signed by Trek Segafredo for whom he’ll be riding in 2020 alongside such cycling legends as Richie Porte and Vicenzo Nibali! To say thank you the club commissioned a special piece of artwork created by Mark Boyles of Charlie competing in the U23 World Championship TT race wearing the jersey of the U23 National Champion. Charlie generously gave the jersey as a raffle prize with Helen French being the winner. She’s promised not to even wash it! Past winners of each trophy can be viewed here: