The Spring one day Classics start soon and Mike Kirby can’t wait for the Omloop in particular as he describes here.

It’s only 50 more sleeps to Omloop Het Nieuwsblad I gleefully announced the other day. ‘You are such an anorak’ said Helen looking mystified and a bit bored. She knows full well what I am talking about. I have been giving her regular updates on the countdown to the first of the Spring Classics for weeks now. ‘What evs’ she says. Triathletes eh!

YES! Omploop Het Nieuwsblad (OHN) is on the 29th of February this year. It is ‘only’ a minor classic to be fair, but Classics nerds will be glued to Eurosport for the fun and games. With cobbles, sharp climbs, mud, blood, guts and thunder. (Sounds like a Star club run except the cobbles of course) I can’t wait.

OHN is the first of a series of races over Flanders fields. The hallowed ground of bike racing. It is the Aperitif, the amuse-bouche, for the Entre that is Gent – Wevelgem and the main course, ‘De Ronde’, the Tour of Flanders itself, the early April Monument, fought out over many of the same roads. 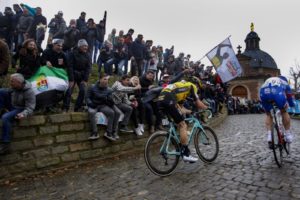 Even the names of these races give me goose-bumps of expectation. They are hard races. Omloop is almost 200 kilometres of wind-swept ups and downs, this year with 13 climbs and 7 cobbled sections. The race features the Muur de Geraardsbergen. Think Sunrising Hill with cobbles, but steeper. The Muur is nearly 1100 meters long, averaging just under 10% and maxing out at nearly 20%, and a pretty dome shaped chapel at the top. It is unlikely the riders get to admire the view. It is a cauldron, as the pressing Belgian fans (short for fanatics) lean in, the riders say they can smell the beer breath.

Last year there were 9 Belgians in the top 15. Names you can endlessly roll around your tongue like a demented Rob Hatch. The best one-day racers: GvA, Gilbert, Teuns, and Naesen.  Stybar used all his guile to get the better of all this Belgian fire power last year. Past winners read like an all-time list of greats: Merckx, de Vlaeminck, Museeuw, and Maertens.

But this is humble, no nonsense bike racing. The very foundations of the sport, and for me where the real romance lies. The glitter of the Grand Tours is entirely absent as is some of the predictability. The race delivers a shock of colour to the winter-bare Flanders landscape. The ardent fans crowd the climbs, wrapped tight against the wind, fuelled by chips, waffles, beer and an enthusiasm for real sporting endeavour.

Omloop, like most of the one-day races, can be a war of attrition. Team leaders burn their domestiques quickly and by the end, the front of the race features only the strongest. This is Darwinian, survival of the fittest. It often comes down to an act of will. Who can go hard over the Muur and follow it up with going hard all over again on the Bosberg.

And just in case Omloop is not enough for you after a winter of meagre rations, the next day, the same riders race from Kurne to Brussels and back again.  Can’t wait.