Entries have now closed for the club’s first event of the year, the annual Hardriders TT, which takes place on Sunday 1st March starting at 10am. As a season opener, the 70 rider entry has again attracted some of the region’s best time triallers. An excellent total of 22 Star riders have this year entered, which includes four women and one junior, making up almost a third of the of the entry.

Often held in early season challenging conditions, as the name implies, this is a tough 23 mile time trial, even on a good day. Held entirely on the A422 it takes in both a descent and return ascent of the long steep 17% Sunrising Hill. Starting outside the old White Horse at Wroxton, the course takes the riders to the A422/A429 roundabout just outside Ettington and then returns to the finish at the entry back into Wroxton village. 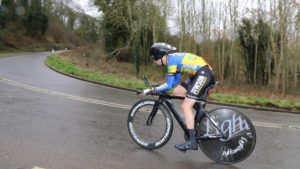 Hook Norton Brewery has this year kindly agreed to sponsor the prizes for the various categories. Winner of the last two events and course record holder, Jack O’Neill (Team Jewson) is back for more and must again start as one of the favourites for the Broughton Cup. However, he’ll be up against professional rider Jacob Tipper (Ribble Weldtite Pro Cycling Team) and David Mead (Race Rapid), plus front runners from last year, Paul Atkins (Kenilworth Wheelers) and two local JRC Shutt Ridley RT riders Simon Smith and Blaine Carpenter. Youth verses experience between local riders Lydia Watts (Liv AWOL) and Naomi de Pennington (BSCC) should provide the main interest in the women’s category.

Jack O’Neill’s course record time is 51min 38sec, set in 2017, when he took 4 seconds off Dan Bigham’s record of the previous year.

Thank you to everyone who has volunteered to help out with marshalling and other duties on the day. However, there’s always a chance we made need some additional help, so don’t be afraid to call into the HQ at Wroxton Sports Club áround 9am.

There will be no club rides on the day.