Easter weekend is usually a period in the cycling calendar that is packed full of, however in the current climate where all outside racing is suspended, riders of all abilities are taking to indoor virtual racing held on online platforms such as Zwift.

British Cycling Central region were holding a league series for local clubs alongside this to offer some inter club bragging rights with points gained counting to league positions.

Friday evening brought stage 1, with the race taking place on 12 laps of the fierce Zwift Downturn Dolphin circuit with a total distance of 24km. 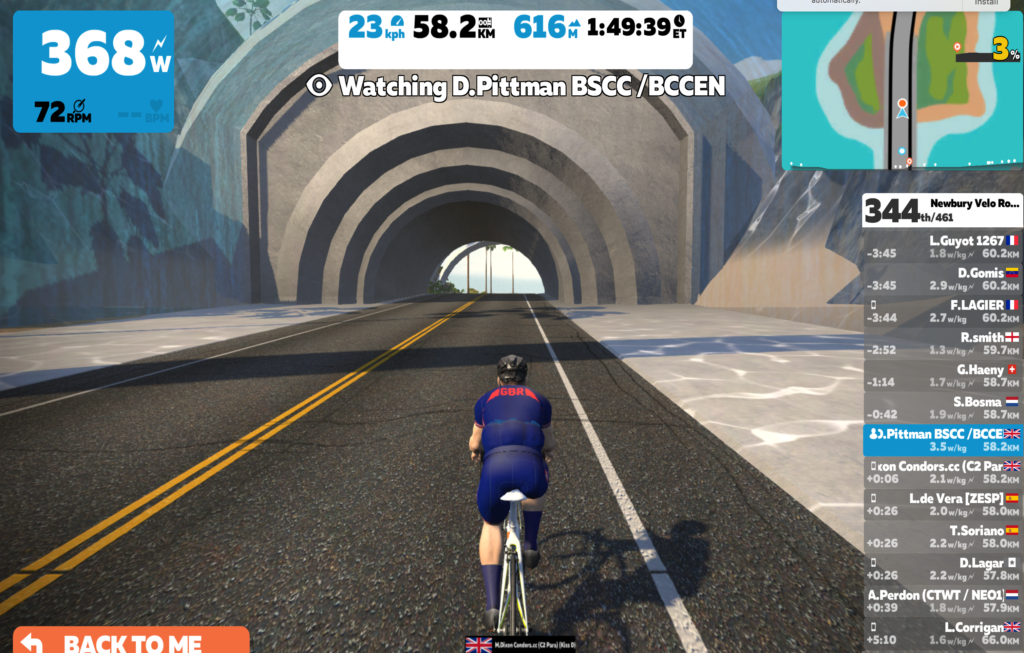 With little rest for the riders, Saturday’s second stage began at 10:00am with the 10 mile time trial, consisting of 1lap of the flat roads of Tempus Fugit in Watopia over 17.6km

Once again, the race attracted a strong turnout of nearly 400 riders on the startlist and, despite the hot weather (in the countries where outside riding is still allowed), we didn’t see a high level of drop-outs.

Banbury star had 2 riders line up today, in the Category A race Simon Bull and in the Category D race, Dave Pittman took to day 2 holding 2nd place overall in General classification.

In the Category A race, those at the top of the table in last night’s crit remaining away this morning, it was time for David Fellows (SCCZRT) to take the victory in 22:53. His sixth place in the crit last night means he is now leading the “A” riders in the three-day race. Marcel Schubert (Darlington CC) finished five seconds adrift in 22:58 which sees him in the bronze position amongst the A category riders. KRT’s James Hodges strong time trial performance today has catapulted him to second place overall in the category. Banbury Star rider Simon Bull put in possibly one of the early season best times with a time of 23:55 placing him 33rd in a very strong field.

In the Category D race, Nigel Brown (NVCC) further cemented his position at the top general classification finishing in second place in the time trial, seeing him going into day 3 with a nearly 2minutes and 30 second advantage. Dave Pittman (Banbury Star) crossed the line in sixth place, but this was enough to see him end the day still in second place on GC. Kenilworth’s Kevin Denson’s good ride in today’s time trial for fourth place saw him move up to 3rd place overall, with only 30 seconds separating 2nd and 4th place.

Sunday brought nearly 500 riders to the start pen for the third and final stage of the Easter Bunny 3-Day Stage race. With much of Europe bathed in sunshine, it would have been a perfect morning for a race outdoors – but the indoor option was definitely the second best option, and allows those competitive juices to keep flowing.

The final stage was held on the classic Big Foot Hills course in Watopia. A 70km road race, taking on 5 big climbs with a total climb elevation of almost 2500 feet.

The course was designed with enough climbing to make it interesting and allowed riders to play to their different strengths throughout.

The race began at a fast pace and saw 1st placed rider Nigel Brown pushing on very strong, forcing a breakaway taking with him, 4th placed Kevin Denson (KWCC) and 3rd place Ray Douglas (British Masters Turbo racing) leaving Banbury Star’s Pittman in a chasing group some 5 minutes behind. As the miles went by the race hit the biggest climb of the day, at this point but the breakaway group had started to split with Brown dropping the other 2 riders. Dave Pittman decided he had to make a move on the climb if he was to retain 2nd place, and put in a big effort up the climb.

As the riders crested and took on the fast descent, Pittman caught up with Douglas, and then found Denson as they started the final climb of the day with just over 25km left. The pair battled it out on the climb with both riders taking turns to attack each other, however it was Pittman that managed to break away 500m from the top pushing on giving a 30 second advantage at the summit.

At the bottom of the final descent Pittman found himself alone and solo time trialling for the last 18km to the finish. Spurred on by messages of encouragement from Star’s Race Captain and club DS Mark Boyles.

The race ended with Nigel Brown finishing first, gaining some five minutes ahead of his nearest competition which saw him take the overall category win by an astonishing 12 minutes. Second place on the day went to Craig Whittle (British Masters Turbo Racing), and Banbury Star’s Dave Pitman finishing in third place. This was enough to consolidate him in second place overall in general classification, with Kevin Denson (Kingston Wheelers CC) putting in a solid ride to leapfrog Douglas earning him bronze on GC over the three day race.

The team competition was no less exciting. Whilst Newbury Velo were hoping for a home win, the strength and depth of the team put in by British Masters Turbo Racing saw them dominate. There were many familiar and talented names from this team, and it was great to have so many riding in the series. Newbury Velo finished in second place (5:11:23).

In the D category Banbury Star Race Team finished the weekend in 3rd position in the team classification.