My Dad was my inspiration into cycling when I was a lad.  He raced as a younger man to quite a good amateur level in the West Midlands, until his racing career was cut short by a severely broken leg in a Sunday League football match.  After that, he won’t mind me saying that he discovered the pub scene and that was that, although he retained an interest in cycling for years to come and from the age of 8 or so I would watch the Tour with him on TV each July when he came home from work.   In those days, it was a 30 minute highlights show, so the coverage was nothing like it is today.

My parents gave me my first drop bar road bike when I was about ten.  It was a re-painted Raleigh which used to belong to my brother, and I loved the black and pink paint scheme my Dad had put on it in the garage because it was unlike any other frame.  Then at about 12 or 13 I got a lovely new yellow frame from a bike shop in Cheltenham; in the days when you could just buy a frame off the peg in any bike shop.  It was then that I learnt to build bikes – my Dad teaching me how to install all the components, including the push fit headset and bottom brackets of yesteryear.  I have always built my bikes since that time, as the build is as much fun for me as anything else.  I loved that bike, although not as much as my Dad’s new-fangled aluminium Trek, which I used to race around the block whenever he would dare to lend it to me. 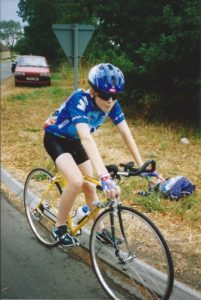 Just a teenager on my lovely new yellow road bike

I rode my first club 10 TT with Corinium Cycles on that yellow bike in about 1994 and posted a time of around 33 minutes, which wasn’t bad considering I had the worst stitch of my life for 6 of the 10 miles and could hardly breathe.  I learnt then never to have a massive plate of pasta before a race.

I continued riding through my teens, buying an Olmo frame and building that up too, although going to boarding school full time meant I was only really able to ride during the summer holidays.  I recall as a teenager watching Chris Boardman smash the pursuit world record in the superman position at the new Manchester Velodrome and going to the Herne Hill Easter Monday meeting as well as watching a few other events like the Kelloggs Tour of Britain, or whatever it was then.   My main sporting focus though became hockey, and I played to a high standard. In fact, I first came to Banbury aged 18 whilst playing for Cheltenham Hockey Club, never expecting to move there later.

University followed, and I stopped playing sport altogether, which I regret to this day.  I then found cycling again at the age of 26 when I decided it was time to stop smoking and get fit.  I pulled my old bike out of the garage and struggled to ride 5 miles.  Nevertheless, I persevered and joined Bicester Millennium CC, later becoming Chairman when my involvement and participation increased.  Quite honestly, it wasn’t a role I enjoyed, but I did what I could in my two years in the role. 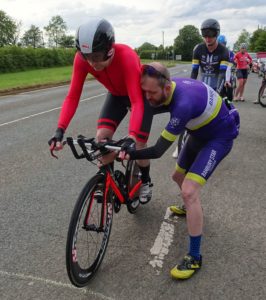 Starter and starting at a Wednesday night club TT

I left BMCC a few years later when I moved to Banbury and eventually I joined our club, which is a club I am proud to be a member of today.  I started racing again and have since done some track racing as well as TTs (both keen interests which I pursue to an average level myself).  I decided to put my name forward to be TT Secretary a little while ago because I believe that a club is only as strong as the members who are willing to put something in to it.  It is an easy job with the support that the club enjoys from Keri Williams in particular, but also the many others who help to make the events each Wednesday work so well.  I grew up in the days of Cycling Weekly being plastered with photographs not just of world level pros, but also domestic TT legends, like Boardman, Obree, Prebble, Dangerfield, Wilkinson, Butler and Cammish.  It is a pure discipline, and accessible to anyone with any sort of bike