The club’s Wednesday TT season at last got off to a great start yesterday evening with an entry of 50 riders – 30 from the club and with 11 clubs represented in total. An overcast sky, a somewhat chilly summer evening with little or no wind, made the conditions ideal for time trialling on the club’s 10-mile K4/10W Warmington/Gaydon/Warmington B410 course. 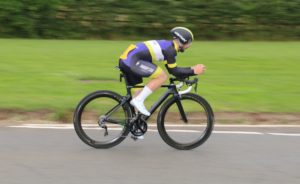 Luke Norris leads the way on our restart TT

We also had a new winner in club member Luke Norris, who unlike most of his top ten competitors, was not on a proper TT bike. His winning time of 21.47 was only 54 seconds off the course record set by seasoned campaigner Danny Axford at last year’s Open TT.  Just 17 seconds behind Luke was regular visitor Simon Smart (Drag2Zero) with Blaine Carpenter in third a further 6 seconds adrift. The club had 5 riders in the top 10, which is encouraging given the competition and the season’s delayed start.

New Under 18 records were however set amongst the junior Star club riders with Peggy Simpkins (15) setting the female record at 29:30 and Skip Nelson (17) narrowly beating Louis Bushby (15) by 4 seconds crossing the line in 25:47. Daniel Roberts (Team MK) also broke the U18 record for non-BSCC members with a time of 24.01. 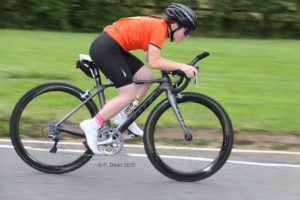 Her father has held a few club records in his time, now Peggy Simpkins has started

Ten women entered the event and they too provided some close times, with second, third and fourth places, covered by just 4 seconds. However, carrying over her excellent form from last season, Naomi de Pennington was again the clear winner on 24.56, just over a minute clear of the rest of the field and just 8 seconds short of the women’s course record. Visitor Jill Mckinnon (Kenilworth Wheelers) was second – setting a non-BSCC female record on 26.06, with club members Suzy Patience third on 26.09 and Denise Shepherd fourth on 26.10.

Full results can be found on the TT page here