The course starts and finishes near Swerford running out along the A461 to the Chipping Norton roundabout and back. A fresh cross headwind challenged the early riders in particular on the outward leg, but the slightly more downhill return leg and a change of wind direction made for a fast ride back to the finish. 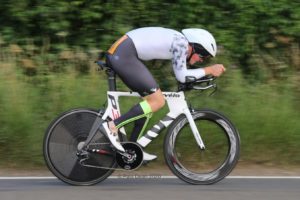 This was clearly something first time visitor Ross Holland (Saint Piran) took full advantage of, winning by 38 seconds, with a time of 20.54. In second place was last week’s winner and first Star rider home Luke Norris on 21.32, which was a new club record. Blaine Carpenter was just 6 seconds behind on 21.38. Another very close and fast event with the top five covered by under a minute and 18 riders averaging over 25mph.

The women were again well represented, with 13 taking the start, which included the youngest and oldest riders in the whole field.  The return of Lydia Watts (AWOL) and her expected battle with the club’s Naomi de Pennington did not disappoint with Lydia crossing the line on 24.30, just 10 seconds ahead of Naomi. Lydia’s win also saw her lowering her existing non-BSCC course record by 37 seconds. It was also close behind with Annie Heaney on 25.27, Seanin Gilmore 25.36 and Fay Barrington 25.44.

Other records on the night were again set by the club’s juniors with both Peggy Simpkins and Skip Snelson in the U18 female and male categories.

A preview of next week’s Tysoe 10 time trial and the link to register is now also live, here