Apparently, bikes are like handbags. The optimal number to have is one more than you currently own.  I can’t remember a time when I didn’t have a bike, but how did I get to the six bikes (all absolutely essential of course) that take up all of the space in the garage? It has been a long journey.

When I was a kid, I got taller quickly and out-grew my bikes as fast as Mum and Dad could afford replacements. My brothers got my hand-me-downs, assuming they were still in one piece, which often they were not.

The first full sized bike was a big old silver job from the second-hand bike shop. I had stripped it of all the bits that I didn’t need and replaced the bars with some cow-horns, speedway style. We would throw sand on the narrow strip of tarmac that was part of the farm lane and make our own speedway track and run races against the Ward brothers, power sliding at full tilt. What bits that were left on this minimalist machine, kept falling off though, including the front brake one time. I watched it in slow motion horror as it went all the way round the wheel before jamming behind the forks and sending me over the bars, head-first.

Most Saturdays, I want with my Dad to Doncaster Cattle Market.  This gave me a chance to visit the bike shop at the far end of the High Street. I needed to see ‘my’ bike. To be precise, a metallic brown Raleigh Mercury race bike with subtle, but diamond bright ‘world champion’ rainbow rings on the downtube. It was front and centre in the shop window and I would stare at it, my nose pressed hard to the glass, needing it so much, it hurt. 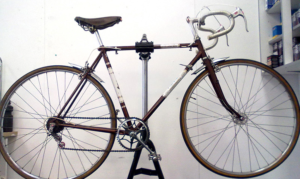 This is not the actual bike, but it’s the same colour and spec

My head was full of race bike riders and my favourite team was TI Raleigh, with their bright yellow and red kit, and gorgeous red bikes. Raleigh riders Jan Raas and Gerrie Knetemann were my idols. Both elegant riders and both World Champions, and both, unusual for cyclists, but important for me, wearing the same out-sized 70’s glasses I wore. Their sleek pro- machines were achingly lovely, but way out of reach for me.

My bike had Reynolds 531 tubing, a chrome stem, angled slightly downwards to drops with white bar tape. It had proper gears, a down tube shifter, and rear derailleur. It even had toe-clips and straps. The paint job had a deep metallic luster and shone so brightly. I want back every Saturday to make sure it was still in the window. I was saving like mad. Dad paid us for work on the farm. When I was eleven, Dad paid me eleven pence an hour, but only if I filled in my weekly time sheet. A birthday meant a pay rise.

It took quite a while to save up, with the money from the farm and a bit of birthday money. Every weekend I would run to the shop, praying my bike was still in the window. Then one day it wasn’t. My heart broke. I think I almost cried. Could it be inside? I had never dared to actually go into the shop. Dad thought going into shops meant they might try and sell you things. I stepped through the door. ‘Can I help you son’ asked a man in a brown coat. ‘Just Looking, thank you’ I told him, staring at my feet, avoiding eye contact, scared stiff I was about to be sold something. Close to panic, I urgently scanned the rows of bikes inside. My bike was still in the shop, lined up with some others at the back. I breathed again and fled.

Eventually I had the £49.99p I needed to buy the bike, I walked, head up, heart racing, palms clammy with anticipation, into that shop and told the man in the brown coat that I wanted to buy that one please, and please could I ride it out of the shop, right now, please. Thank you.

I had waited forever for this. But my life was complete. The man lifted the bike down for me and I laid my hands on, immediately lifting it up, not really believing that it could be so light.  I had told Dad I wanted to ride it home. It was over twenty miles and the last ten, mainly uphill. I bailed out about 3 miles from home, utterly exhausted, and called home for a lift.

But I had my first proper bike. Dad said he was surprised the saddle didn’t cut me in half it was so racing sharp. He couldn’t believe what a daft idea the toe-clips and straps were. Soon after, I bought a pair of Raymond Poulidor bike shoes with little alloy plates that slotted into the pedals. These were to be nailed on to the thick laminated leather soles with the tiny tacks provided. Strapped in, it was virtually impossible to get your feet out and of course, junctions, traffic lights and generally stopping without falling over became a major issue. Nothing changes.

On my Raleigh I was Jan Raas from Pro Team TI Raleigh. He wore glasses just like mine. In my head I was just like him. I have never lost the thrill of standing on the pedals at the start of a ride, and that, I suppose, is how I ended up with six bikes.