As we started June, I felt that my fitness levels were going the right way, plus I also had a target to cycle 500 miles in June for Bone Cancer for a local family whose young son has been having treatment for the condition, and his Dad is a long-term friend of mine.

The 2nd June was Chippy 10TT night, this resulted in a PB on the course for me by about 45 seconds, so a promising start to the month.

Then a few steady miles on the Friday and Saturday in preparation for the Oxonian 50-mile TT on the Sunday morning 6th, this meant an early wake up and drive to Kingston Bagpuize and the A420 course for my start time at 7:19am. My focus for this was to break the 2-hour barrier for the first time. The westerly wind meant that there was a headwind on legs 1 & 3 which proved favourable as this tailwind on the two return legs was definitely helpful. The first 12 miles felt tough and at the turn my average speed was quite a way off where it needed to be to hit my target. However, after the turn I seemed to settle into a better rhythm and at the second turn it was looking good for my target with my average over 25mph. I knew I was going to lose some on the 3rd leg, but dug in and consolidated well with my average, just dipping below what I needed, therefore turning for the final time I knew if I could put in a solid final leg, I would be good to hit my target. So, it proved, with a finish time of 1hr 58mins 41 secs, taking 6 minutes off my previous best 50-mile time. However, my body didn’t really thank me at the end for having to stay in the TT position for that long. But to top it off Banbury Star won the team competition with Ant Harriss, Simon Bull and myself combining to take the fastest team cumulative time, this was also the first time I had won anything at an Open TT. What a great day, well morning, as I was back home before 11am.

After this event my 500-mile challenge was looking good as I was already at the 155-mile mark for the month. I then had a fairly easy week steadily ticking off the miles for the challenge. This then took me to Sunday 13th, where I decided to tick off the Strava Gran Fondo 100km challenge, where I did a solo ride down and through Long Hanborough, taking in some roads I had not done before, this resulted in a 63-mile loop taking my 500-mile challenge for #teamfreddie to 307 miles so far for the month after 13 days. 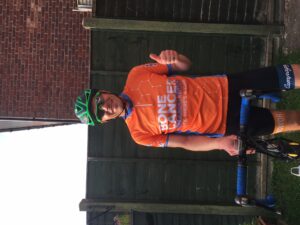 My next focus was then the BSCC 20k course on the Wednesday evening, having not done a sub 30 min ride on the course for two years. The weather was looking fairly favourable and I was determined to get below the magic 30 minute mark again. As my start time approached, I felt fairly relaxed and my first focus was to see how long I could hold off Jon Simpkins who was starting one minute behind me. I was pretty pleased though as I was on the Stratford Road before he came thundering past me. I then dug in to try and keep him in sight until we reached the twists and turns of Wroxton, at which point a glance at the time as I entered the village, I was thinking I was in good shape and gave it everything I had left, crossing the line and recording a 29:19 which was a new PB by over 20 seconds.

Over the next 7 days the mileage took a bit of a downturn, due to some unseasonably bad weather for June and other things going on, therefore by the 23rd of the month my mileage total for the June challenge was at 427 miles.

However, I was then looking forward to Friday evening which was an Open 10, the other side of Milton Keynes. The TT was organised by Team Salesengine and looking at the profile of the course it looked favourable for a fast time. My evening didn’t start well though, as I left work slightly later than planned and only arrived at the venue 30 minutes before my start time, so a quick turnaround was needed at this point, as I had to sign on, get changed and then ride the 2.5 miles to the start. However, this may have worked in my favour as the adrenaline was flowing and I was ready to race. The start was a kind downhill so I picked up speed quickly and got into a good rhythm, however with my minute man a DNS, I was thinking there was no one to focus on and try and chase down. However, I proved myself wrong and by the turn at about 5.5 miles I caught my 2-minute man.  Average speed and time were looking good at this point so got my head down for the return leg, which I knew was going to be tougher. This proved to be the case and I kept in a good rhythm and finished in a time of 22:02 another PB for the month and taking 40 seconds off my previous best for any 10-mile TT. This also resulted in 12th place overall in a field of 55 starters.

Mileage wise I was still going OK and I only had 26 miles to do to complete the challenge of 500 for the month. Saturday was a day off the bike, although it was a day out at Santa Pod for some Drag Racing.

As Sunday rolled around it was 7:30am start as I rode over to meet the Hooky guys for our planned 100-mile ride. This was a great ride through the Cotswolds taking in some testing climbs as you always find out that way, and an excellent lunch stop in Bourton-on-the-Water. Rather than settling for just the Hundred miles I decided this was a good opportunity to do 200km (125 miles) a distance I had not done before. Therefore, riding over to Hooky, where we had planned the 100 to start and finish from, from Banbury and back again got me the required miles in. However, I must say the body was feeling it for the 5 or 6 miles, but it was worth it as this ride smashed the mileage challenge and posted my longest ever ride, and the good wife had a lovely roast dinner cooking when I got home, which went down very well.

So, after the big Sunday miles I was sat at 599 for the month, I had Monday off but decided I would like to get to 650 for the month. So, a work from home lunch ride on Tuesday and some extended commuting miles on 30th got me up to a total of 652 miles for the month of June.

As I write this my total raised is £245 with the donation window open for another 7 days, and a big thank you to those that have donated so far.

So, into July and next on the agenda for me are some crit races, I am currently signed up for the next two Saturdays at Dalton Barracks, Abingdon for the usual wind fest racing around an airfield!