Second claim club member Martin Norris writes another blog, this time on his excellent exploits at the National Masters Championships.

On Saturday 3rd July I headed to the Leicester Cycling Circuit to race in the British Cycling National Masters Circuit Racing Championships 2021.  I race in the 60-64 Category and we were first off at 9.30 a.m.

I see myself as more of an endurance racer than a circuit racer, but I had enjoyed the two circuit races I’d done this year and hoped to do reasonably well.  There were 32 on the rider list and my first target was to get 15th or better as that would give me my first British Cycling Points (the race is a National B, Band 3 event).  My stretch objective was to get in the top six as that would get me enough points to move up to Cat 3, which was an objective of mine for this year,

The forecast wasn’t great, so I had persuaded myself that it would be very wet – so I would be ready for it and happy to ride in the rain.  Sure enough, it was raining as I got up at 5:30 a.m. and it didn’t improve as I drove the M69 to Leicester.

I parked up and met my coach, Roy Holmes, for the first time in the flesh.  He won this event the last time it was run in 2019.

I warmed up partly on the local roads and then on the circuit.  It was 1km in length, with a good surface and whilst there were six bends, you could pedal through them all.  As we warmed up, the rain had abated although the track was wet.

There were two sighting laps and a rolling start which I like.  It was pretty steady to start with and the first few laps were straightforward.  Then a few exploratory breaks started.  My plan was not to be the chaser in the first half of the (one hour) race but to stay in the front half so I didn’t end up stuck in any group dropping off the back. 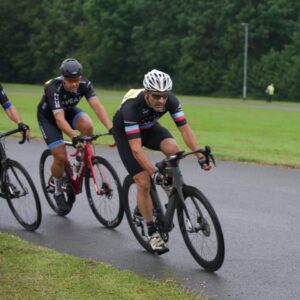 This plan was working quite well and I was riding within myself.  After 30 minutes more attacks were made and they were more serious.   I did chase most of them, but tried to be the third or fourth chaser so I didn’t have to make those big VO2 efforts.  A rider or two had been distanced, but mainly we were still all together.  With 20 minutes to go, the rain came down again – and soon my riding glasses came off so I could see.

I followed one break which took me to my limit briefly and then straight away number 10 went off the front in a secondary attack.  It wasn’t that aggressive an attack, but I worked to get in his draft and sat there for a while.  Then number 6 came up to us and said “you working?”  We had almost inadvertently established a small gap and we set off together.  We worked well and the pack dithered and suddenly we had 20-30 seconds.  There were 7-8 laps to go and we just kept working together, all taking our turns.  Amazingly, the gap was holding steady.

We got to 3 laps to go and were still the same distance ahead.  I looked behind and I had unwittingly gapped 10 and 6 by a couple of bike lengths.  Do I go and try and leave them or do I slow to let them get back on?  In the end I did something in-between and they got back on.  Three, 2, laps to go and then the final lap arrived with the accompanying bell.  Provided we didn’t mess around, we had enough of a lead that 1st, 2nd and 3rd were ours.

We got to 400 metres to go and the pace was high.  I had managed to get my breath ready to sprint.  Number 10 went and I was on his wheel.  He didn’t gap me, but I couldn’t catch or pass him, so I came in second.  I was delighted and surprised, but just a bit gutted I hadn’t got the 1st place.

Roy came in 4th, beating the rest of the bunch in the sprint.  I then found out that number 10 was Ian Cowan – who is also coached by Roy – so Holmes Coaching had 1st, 2nd and 4th in the National Championships.  I bet that goes on Roy’s website!

Number 6 was Bernard Bunting from London Dynamo who I recognised from the race at Hillingdon 10 days ago.

We then had the glory, of standing in the rain for 20 minutes to get our medals and a couple of photos.  Happy Days.

If you are no longer a strapping youth, I highly recommend giving Masters Racing a bash. Races are organised by Brirish Cycling, British Masters Cycle Racing, TLI (The League International) and no doubt other bodies.