Frustrating, is the word I’d use to describe professional cycling.

That in the twenty-first century there can still be such a huge gap between female and male cyclists and that as a junior, I have the fear that being a professional would just not pay enough to survive.

However, there has been progress made – hasn’t there?

No. Frankly the progress being made by organisers is minimal, with the first ever female Paris Roubaix taking place last month, after the men’s race has been going for 125 years. I know this is a great and historic moment, but why has it taken over a century for women to finally get a race? The organisers should be embarrassed to be part of such an important race and for it not to be equal. And don’t even get me started on the difference in prize money – it’s too frustrating to mention. 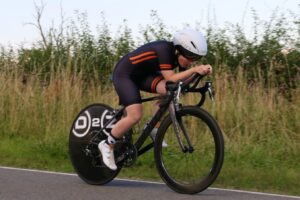 At home on my TT bike

I also believe that professional male cyclists with a high profile in the sport are not doing enough or anything at all to make a difference. Why is it that males have to make the changes for the women when they aren’t the ones being affected? Why as females in the sport are we given no place to make change? We all know that society is not always equal, but it is not acceptable for this kind of sexism in cycling when there are many other sports that have opened up to female participation and equal prize money. We all have a part to play to encourage progress whether you’re a man or a woman, junior or veteran. Together we can all make a difference.

After doing research on this topic, I have become aware of how lucky I am to be part of the Banbury Stars. The way we have been treated as a team is impeccable and the club’s eagerness to encourage and support the female and junior cyclists is noticeably better than most places in the country.

I truly believe that if all local clubs and communities are this encouraging especially to the younger generation, that cycling organisations will have no choice but to change and at a far greater rate.

Before writing this, Roger Gollicker told me about the previous blog written by Lydia Watts on inequality. After having read it I am still surprised by the lack of progress made over the past four years since it was written. In a way it’s a reassurance that I am not the only one who is frustrated and trying to make change. Progress at the minute is too slow, if we all voice our opinions and pressure organisers enough things will change.

So, I urge you to discuss this, I urge you to write to the council about the state of local roads, to spread the word on social media, to encourage someone onto a bike or to become part of the team, talk to your fellow cyclists and those in high enough places to make change. If we express our anger to enough people, change will come. Bringing cycling into the twenty first century will encourage a wider range of people to cycle and every one person that rides a bike is one person who understands the difficulties faced by all of us on the road.

Thank you for reading, I  am currently studying for an extended essay (EPQ) for my A levels on this topic and would be incredibly grateful if you could answer this quick survey I have created just to gather opinions.
Peggy’s Survey Monkey
And thank you to Roger Gollicker for allowing me to write this blog this and surviving my horrendous interview.

For those further interested, this is a link to the blog that, then junior member, Lydia Watts wrote in November 2017 called “Gender Inequality in Cycling”. Click here

The recent launch of women’s British Cycling Breeze rides, led by Heidi Yates, is another example of the club’s efforts to encourage women into the world of cycling. This is a far cry from the club’s early days, when we were definitely slow to react, as another blog in 2017 explained. Click here