Club member Naomi de Pennington has won a lot of club TTs this season as well as breaking records along the way, but her weekend on the Isle of Man was surely the icing on the cake. Read her brilliant account of how she got on.

Feeling like I needed a challenge to keep me motivated to the end of the season, and with the Etape du Tour, Tour de Yorkshire and Tour of Cambridge all cancelled for the second year running, I entered the UCI Gran Fondo Isle of Man event, to be held the first weekend in September. With the Isle of Man having reopened its borders, it seemed like the ideal opportunity for a bit of adventure. Having clocked up a few longer rides this year, improved my QOM time on Larkstoke and managed to actually cycle up the wall that is Bushcombe Lane, I felt moderately well prepared, although mention of 27 percent gradients was praying on my mind a little.

The trip started very early on Friday morning, with a drive to Liverpool to catch the bizarrely named Steam Packet ferry to the Isle of Man. The first view of the island of fog-shrouded mountains is nothing if not daunting. 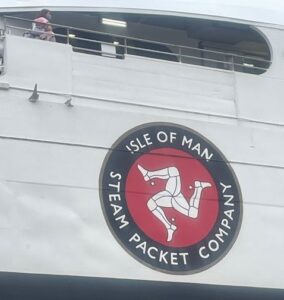 Arriving on a cold, grey and windy day it was easy to see why the Isle of Man produces such tough cyclists. I drove from my hotel in Douglas to the top of Snaefell mountain – the finish of the following day’s time trial course. The road up Snaefell is part of the famous IOM TT motorcycle course, so has a beautiful road surface. Unfortunately, the top of the mountain was completely shrouded in cloud, windy and cold. Donning insufficient clothes, I rode to the bottom of the mountain in order to ride slowly back up the course so I knew what I would be facing the following day. Taken steadily, it is a beautiful climb, never alarmingly steep and punctuated by TT signs giving peculiar names to bits of the course like ‘gooseneck’ and ‘stonebreakers hut’.

The following morning, we gathered at the bottom of Snaefell to have our timing chips fitted to our bikes, then were set off up the closed mountain road at 30 second intervals. It was a course of approximately 10km with around 400m of elevation gain, most of it in the first half, to be tackled on road bikes with the option of clip-on TT bars. I judged my effort based on my power meter readings and felt good on the steeper climbing section, then was glad to have added TT bars for the flatter section where it was possible to pick up some speed, although it was very exposed and windy. Grateful to have stuffed a jacket into the pocket of my TT suit, I carried straight on back down via a different route which I knew was the final part of the Gran Fondo course for the following day. Having rather enjoyed the ascent, the descent was a very different story. Gripping my brakes so tightly my hands were cramping, I inched down the steep hairpins to the bottom of the mountain, aware of an increasingly unpleasant metallic grating sound coming from my front disc. 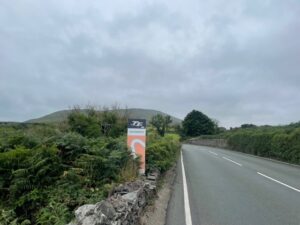 I was greeted at the bottom with the surprising and exciting news that I had won the women’s event. A couple of hours later and we had podium ceremonies for the first three competitors, male and female. I was presented with a bottle of prosecco which seemed like a nice enough prize until I was told I was expected to open it and spray it Grand Prix style. Well, that was an epic fail, but I sort of sloshed it around a bit so that the three of us ended up slightly sticky.

Remembering my brake concern, I asked the mechanic at the race HQ to have a look, and he confirmed that I had completely worn out the brake pads and that the underlying metal was now noisily eating into the disc. But in the true Manx spirit of helpfulness, a call was made to the bike shop, and the answer came ‘no problem, drop in and we’ll sort it’.

A cup of coffee in the lovely bike shop and a multitude of thanks later and I had a shiny new front disc and new pads on board. And now the sun was coming out and I could start to appreciate the stunning scenery. I decided to enjoy the sunshine while it lasted and try out the steepest climb to be tackled the following day after around 100km- Injebreck, with a reportedly ridiculous 27 percent maximum gradient. It really is incredibly steep at one point, and it did cross my mind that my bike might be trying to rear up and over backwards. Afraid to stand out of the saddle in case I toppled, I adopted a low forward-leaning crouching position which seemed to work because I made it to the top without too much trouble. The main hazards of note seemed to be the cattle grids and the meandering sheep. In the sunshine though, the views from the top of the heather-clad mountainside were simply stunning. And with new brakes on board the descent was still a bit hairy but certainly less terrifying. 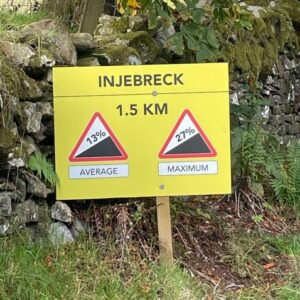 The following morning, I drove back across Snaefell in even worse fog to the race HQ ready for the Gran Fondo. The event was clearly not as busy as the organisers might have hoped in its first year as a UCI World Championship qualifier, but there was still a good turnout for the mass start 130km race, although women were notably in the minority. We were led around behind the official car to the start banner where the timing clock counted us down, and the starter introduced some of the more well-known male competitors. And then we set off behind the start car for the first neutralised section of the race, except that before it had even peeled off, we seemed to be going at around 50kph and my heart rate was already close to maximum! At this point all the winter Zwift racing in Cat A men’s races proved to be great training as I just kept thinking, ‘the longer I can hang on to this group the better’, but that meant sprinting out of every corner and up every incline. By the time we reached a loop of a very windy airfield some groups had split off the front, but when I glanced behind, I could see no-one, and the thought of riding solo in that wind was motivation enough to stick with the group for a bit longer.

The course had 3 timed climbs on it, with timing mats at the top and bottom, for a king and queen of the mountains competition. The climbs in the Isle of Man are certainly not like anything I have ridden at home, with short very steep sections giving way to longer drags that went on for 20 minutes or so. The first climb broke up the group completely, and much like in the virtual world, I gained plenty of confidence by overtaking quite a few men on the way up, only for them to speed past me on the descents. Some of the descents were really tricky with gravelly potholed road surfaces and very tight turns, and plenty of signs urging ‘extreme caution’. From then on, I was fairly content to ride on my own, the course being mostly on closed roads, and brilliantly marked with marshals at every turn.

Although it was mentioned in the race manual, I was nevertheless fairly horrified when one such marshal directed me up a small gravel track. This ‘strade bianche’ section of off-road gravel and trail seemed totally inappropriate for my beloved road bike and the memory of a massive fountainous non-sealing tubeless tyre puncture on our 130-anniversary club ride caused by a tiny patch of roadside gravel was still fresh. But I pressed on cautiously, hoping desperately to avoid mechanical issues.

With that out of the way, two more main climbs followed, with plenty of significant lumps in between. The hardest part of the course actually seemed to me to come after the summit of Injebreck, when we rode along the top of the mountain into a raging headwind. I overtook one guy who then jumped on my wheel for the remainder of this long draggy section. By then I was a bit too tired to even flick a weary elbow and, in any case, it seemed like fair payback for me sitting on the back of a group for that first segment!  All this time, I was uncertain whether there were any women up the road ahead of me, the start having been so frantic that it was difficult to see who was in front. One guy at the side of the road had shouted “I think you’re the first woman” so I did have some hope that I might be in the lead. On the basis of which I thought I couldn’t bear to be overtaken in the last 20km, so once I had got that brake-shredding final hairpin descent out of the way, I thought of our Wednesday nights and time trialled my way solo to the end.

Relieved by that point to see the finish line, I was greeted by the race organiser who confirmed that I had indeed won the race! And then said that there would be presentations for the overall win and the queen of the mountains and the UCI jersey to come later. Incredible; and then my thoughts quickly turned to the fact that I had a ferry to catch. Which meant leaving in less than an hour. Luckily, the race organisers were the most amazing and accommodating guys, and whilst possibly thinking I was a little bit crazy for having booked the early ferry home, they brought forward the female prize presentation, grabbing the second and third placed women as they crossed the line and ushering them to the podium. So back on the podium for the second time in two days. This time the challenge was being dressed into a jersey by someone else, which I promise you doesn’t come naturally unless you are a small child. Fortunately, with three jerseys to collect I worked out the appropriate stance eventually. And then another bottle of prosecco appeared with the foil already removed in readiness, but to my relief this time the presenter said ‘maybe just take this one home’. So, I bundled myself and my bike back into the car, said a farewell to Snaefell and made it to the ferry in the nick of time. 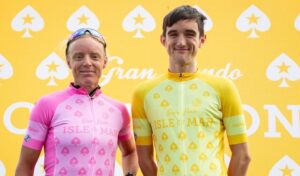 On the podium in my new Pink Jersey

What an adventure; it seems sort of improbable that it actually happened. So, if you see me out and about in a rather ridiculous pink jersey, please don’t laugh too much, as I will have to wear it now and then to prove to myself that it wasn’t all a bizarre dream! I would highly recommend the event, organised by a wonderful team of people around an absolutely amazing route- but check your brakes before you go and maybe don’t book the early ferry home!